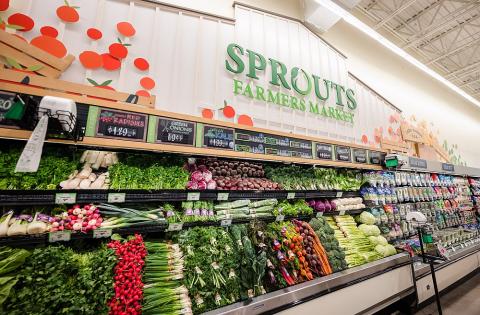 Sprouts Farmers Market wrapped up a solid third quarter that propelled the retailer to lift its full-year outlook.

Sprouts Farmers Market is living up to its name, with several pockets of growth across its business. The publicly-traded company posted higher sales and earnings for the recent-concluded third quarter and is on track to exceed financial expectations for the rest of its fiscal year.

For the 13-week period ending Oct. 2, Arizona-based Sprouts reported that net sales rose 5% on a year-over-year basis to reach $1.6 billion. Comparable store sales were up 2.4% during the same time frame and e-commerce sales climbed 19%.

Earnings were in positive territory, too. Earnings per share (diluted) topped $0.61, compared to $0.56 in Q3 last year, the retailer reported. In addition, cash flow generation remained strong in the third quarter, allowing Sprouts to invest in the growth of the business.

“Despite many of the challenges in the consumer landscape, we are encouraged by our performance in the third quarter," said CEO Jack Sinclair during a Nov. 8 earnings call.

The headwinds in the consumer landscape did show up in some ways at Sprouts during the third quarter. CFO Chip Molloy noted that higher comp sales were supported by an increased basket due to retail inflation, partially offset by a slight reduction in the number of items in the shopper basket.

Still, the overall solid results in the third quarter led Sprouts to raise its full-year guidance. The retailer now projects net sales growth between 4.5% and 5% for the year and an approximate 2% lift in store comps. Adjusted diluted EPS are pegged to come in between $2.32 and $2.36. “We remain focused on controlling the controllable to deliver strong results and create sustainable shareholder value for the long-term,” Malloy said.

While Sprouts added one brick-and-mortar location during the third quarter, the retailer will close out its fourth quarter and fiscal year with a flurry of ribbon cuttings. “We expect to open seven new stores in the (fourth) quarter, bringing our total for the year to 16,” noted Molloy in the financial call, adding that the retailer will also be widening its footprint in 2023. “Given the current uncertainty in the market, it’s a bit early to guide for the next year other than the opening of 30 new stores.”

Two of those locations are welcoming shoppers this week. Sprouts is set to unveil new stores in San Antonio, Texas, and Rancho Cordova, Calif., on Friday, Nov. 11.

Phoenix-based Sprouts Farmers Market employs approximately 31,000 associates and operates approximately 380 stores in 23 states nationwide. The company is No. 53 on The PG 100, Progressive Grocer’s 2022 list of the top food and consumables retailers in North America.