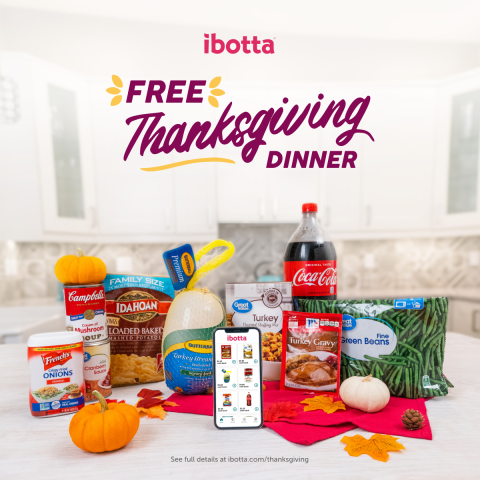 Ibotta's Free Thanksgiving Dinner program enables its users in the United States to get 100% cash back on up to nine holiday food items, while supplies last.

Through an exclusive promotion with Walmart, mobile rewards platform Ibotta has rolled out its Free Thanksgiving Dinner program to feed millions of families on Turkey Day. Together with well-known CPG brands Campbell's, Butterball and Coca-Cola, Ibotta will give households across the country a free Thanksgiving meal for five.

The program enables Ibotta users in the United States to get 100% cash back on up to nine Thanksgiving food items, while supplies last: turkey, green beans, cream of mushroom soup, crispy onions, potatoes, cranberry sauce, stuffing, gravy and a 2-liter bottle of soda.

To redeem the free Thanksgiving dinner, users can download the free Ibotta app or newly introducedIbotta Browser Extension, and follow the instructions to add all nine free Thanksgiving dinner items to their Walmart shopping list. Then they can go to any U.S. Walmart location to shop for the products in the store or shop online for free curbside pickup via Walmart’s Pickup and Delivery service.

“Walmart is proud to team up with Ibotta this Thanksgiving to put meals on the tables of thousands of families across the U.S. at a time when they may need it most,” said Sarah Henry, the retailer’s senior director, content and influencer marketing.

Additionally, as part of this campaign, Ibotta is donating to Feeding America, the nation’s largest domestic hunger-relief organization, which operates a network of 200 food banks and 60,000 pantries in the United States and Puerto Rico.

“While this year has been trying for so many Americans, Ibotta’s Free Thanksgiving Dinner program is our way of making them feel extra supported this holiday season,” noted Bryan Leach, CEO and founder of Denver-based Ibotta.

Ibotta’s Free Thanksgiving Dinner is part of a series of new features and programs aiming to help give cash back to consumers when they need it most.

“After already delivering more than $125 million in cash back this year alone, we know folks need the extra help,” explained Leach. "Our hope is that no matter where consumers shop this holiday – whether in-store, online, for grocery delivery or holiday presents – that we can put a little extra cash back in their pockets, and eliminate some of the financial anxiety we know they’re feeling more than ever this time of year.”

To determine how it could help give back to shoppers during the holidays, Ibotta conducted its 2020 Thanksgiving Survey, which discovered that more than one-third of Americans will spend less on Thanksgiving this year because of tighter budgets. Despite the monetary constraints, however, enthusiasm for Thanksgiving dinner remains high, even if there are diverging opinions on what makes the perfect Thanksgiving meal.

The survey also found that more than one-third of Americans prefer dark turkey meat over light meat, and more than two-thirds (67%) want their mashed potatoes smooth and creamy. Moving on to the divisive issue of cranberry sauce, Americans are pretty split, with 44% opting for a canned variety while 56 percent would rather make their own. Interestingly, though, the majority of Americans (82%) believe that homemade gravy is preferable.

The survey was administered on Aug. 17 and garnered 1,044 responses from nationally representative Americans ages 18 and older, using an email invitation and an online survey.

Bentonville, Arkansas-based Walmartoperates more than 11,300 stores under 58 banners in 27 countries, and e-commerce websites, employing 2.2 million-plus associates worldwide. Walmart U.S. is No. 1 on The PG 100, Progressive Grocer’s list of the top food and consumables retailers in North America, while Walmart-owned Sam’s Club ranks No. 9 on PG’s list.