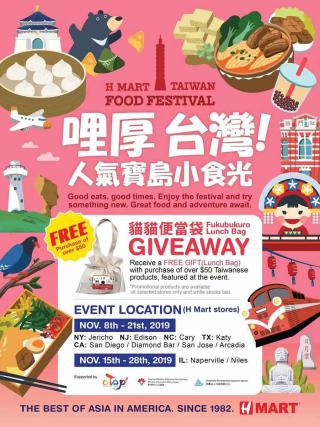 H Mart, which bills itself as the largest Asian supermarket chain in the United States, is holding a two-week Taiwanese food festival this month at 10 of its stores in New York, New Jersey, North Carolina, Texas and California. The event kicked off on Nov. 8 and will end Nov. 28.

During its H Mart Taiwan Food Festival, the retailer will offer a broad range of items from Taiwan, including Sugar & Spice’s French nougat, Old Pot Rice Noodles from Hsinchu, dipping sauces from SauceCo. and homemade biscuits from Hwajen.

Organized in collaboration with Taiwan’s Small and Medium Enterprise Administration of the Ministry of Economic Affairs and Corporate Synergy Development Center, H Mart’s event aims “to introduce distinctive products from Taiwan and create a brand-new retail experience that makes customers feel welcome and comfortable,” according to the company.

This year, the grocer will offer a giveaway of a Hello Taiwan lunch bag designed by Taiwan’s Super B Studio for those who buy more than $50 worth of products promoted at the festival.

The event launched as a week-long festival at four stores back in 2016.

Lyndhurst, N.J.-based H Mart operates more than 60 stores in the United States, as well as locations in Canada and the United Kingdom.