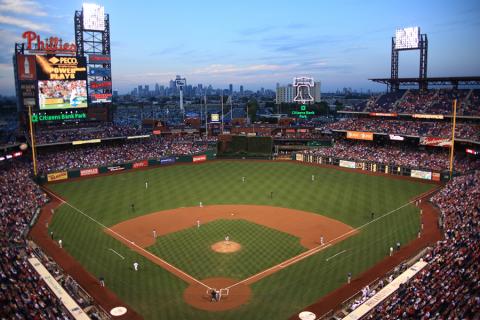 As the Official Grocer of the Philadelphia Phillies for the second year in a row, Giant Food Stores celebrated opening day with its own starting lineup of new promotions for the 2019 season.

“Like all baseball fans, Giant has been waiting for opening day since the end of last season,” noted Matt Simon, VP of marketing at the Carlisle, Pa.-based grocer. “It’s finally here and to mark the occasion, we’re offering our customers many ways to celebrate their beloved Phillies, show their team spirit and save at Giant, all season long. We’re excited to be growing our Giant Heirloom Market brand in the city of Philadelphia this year and look forward to a great second season as the official grocer of the Philadelphia Phillies.”

Together with its vendor partners, Giant will provide additional ways for customers to save throughout the season. For instance, from Friday, March 29 through Thursday, April 11, shoppers who spend $20 on participating products will receive a voucher for a free Phillies ticket.

The grocer will also kick off the season with the return of the Phillies PhanWagon, which will making stops at Giant stores in Springfield, Aldan and East Lansdowne, Pa., on Friday, March 29. Each stop will feature giveaways and appearances by former players and Phillies ball girls.

In late April, Giant’s bakery specialists will once more compete to see who can decorate the best Phanatic birthday cake, and for the first time, the grocer’s followers on social media fans will vote for the winner.

As the returning sponsor of the Phanatic MVP Club, Giant invites fans age 14 and under to gain access to prizes, exclusive events, ticket discounts and other benefits as members of the club, including a discount coupon for a custom cake at Giant in their birthday card from the frenetic  – or is it phrenetic? – team mascot.

Further, on Wednesday, June 26, Giant will join the Phillies in welcoming LGBTQ fans as part of Pride Night at the ballpark.

Outside of the stadium and the stores, Giant’s sponsorship of the Phillies addresses hunger and promotes healthy children, two of the grocer’s longtime philanthropic priorities. Giant and the Phillies will join forces on Tuesday, April 2 to donate 250 hams ahead of the Easter holiday to the organizations’ mutual community partner, Philabundance, the Delaware Valley’s largest hunger relief agency. The supermarket chain and the baseball team will also hold Phans Feeding Families Day on Saturday, June 8, which also aids Philabundance.

The Phillies sponsorship is a key component of Giant’s growing relationship with the city of Philadelphia, in which it has operated since 2011. In January, Giant introduced its newest format, Giant Heirloom Market, in Philly’s Graduate Hospital neighborhood, with plans to open three additional locations within city limits by the end of 2019.

“Giant loves being part of the Philadelphia community and finding ways to give back to our neighbors, because together, we can make a difference,” said Simon. “And like the rest of the city, we can’t wait to watch the Phillies take the field — with the Giant logo behind them in the outfield.”