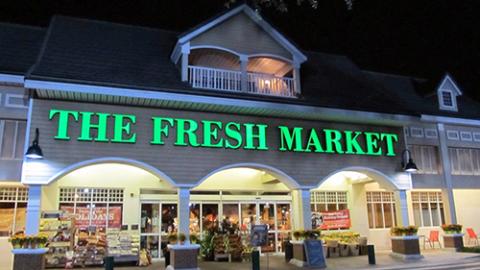 The Fresh Market was recognized by USA Today's 10Best Readers’ Choice Awards as the "Best Supermarket in America" for 2022.

For the second year in a row, The Fresh Market has been named the "Best Supermarket in America" in USA Today’s 10Best Readers’ Choice Awards. Hy-Vee was again named the No. 2 supermarket and Aldi took over the third spot.

A panel of 10Best local experts and contributors nominated their favorite American supermarkets based on value, selection and service. Readers were then able to cast a vote for their favorite supermarket once per day for a 28-day period through the 10Best website.

"We are thrilled to be recognized as the best in America again," said Jason Potter, president and CEO of The Fresh Market. "We are thankful to our guests for their votes and ongoing support this past year, and grateful for our team members who offer impeccable guest service every day."

Founders Ray and Beverly Berry opened the first Fresh Market store in Greensboro, N.C., in 1982 after returning from a trip to Europe with a vision to emulate the charm and essence of a European-style fresh food market. The initial store differentiated itself from conventional supermarkets by offering a farmers’ market atmosphere and intimate epicurean experience, and it became the blueprint for today's 159 stores in 22 states.

Hy-Vee, meanwhile, took the No. 2 spot for the second year in a row and is continuing its ambitious growth strategy with planned entry into Kentucky, Indiana, Tennessee and Alabama. CEO Randy Edeker said Hy-Vee expects to build at least 21 stores in the four-state region by 2025, and plans also call for a Nashville distribution center.The West Des Moines, Iowa-based company currently operates more than 275 stores across eight Midwestern states and has sales of $11 billion annually.

Aldi has taken over the number three spot from Lidl, and also is in growth mode with new stores in the Southeast region and the Gulf Coast. The company is on track to become the third-largest grocery retailer by store count by the end of this year.With U.S. headquarters in Batavia, Ill., Aldi currently operates more than 2,100 stores across 38 states.

Rounding out the top five, respectively, are Lidl US and Connecticut-based independent grocer Stew Leonard’s.

The complete top 10 winners in the Best Supermarket Brand category include:

The Fresh Market is No. 76 on The PG 100, Progressive Grocer's 2021 list of the top food and consumables retailers in North America. Employee-owned Hy-Vee is No. 34 and Aldi is No. 24.