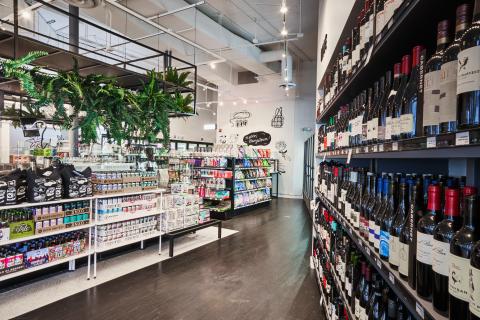 Foxtrot, the all-day café, corner store and delivery market, will continue to expand its footprint within the DMV (District of Columbia, Maryland, Virginia)region by four new locations before the end of the year. These plans include the company’s first store in Maryland, which is slated to open at Bethesda Row shopping mall later this year.

The banner entered the Washington, D.C., market last year, opening its first store in Georgetown in March 2021. This summer, Foxtrot will open its fourth D.C. location on 14th Street in Logan Circle, in the former Barrel House Liquors storefront, integrating the historic barrel entry into the store’s facade. The 14th Street opening will be followed by a smaller grab-and-go store in Farragut Square that will cater to downtown office workers.

After its Virginia debut in Alexandria earlier this month, Foxtrot will open its second northern Virginia location in Rosslyn at The Highlands in early fall. The market expansion is projected to create 100 total new jobs for the region, adding to the almost 100 jobs that the company has created in the DMV market since its debut in the region.

There are now four Foxtrot locations throughout the market, in Georgetown, Mount Vernon Triangle and Dupont Circle in D.C., and Old Town Alexandria in northern Virginia. The forthcoming DMV-area Foxtrot locations will double the brand’s retail footprint in the region, bringing the total store count to eight. With select new store fronts, Foxtrot will also grow its delivery range, bringing its swift 30-minute delivery to even more customers across the area.

As with its other stores, Foxtrot’s new DMV-area stores will be uniquely designed for each community while still supporting the brand’s day-to-night proposition and incorporating signature design elements that include concrete floors, hospitality lighting, wood paneling, warm color palettes and local artwork.

Taking a localized approach to merchandising as well, Foxtrot has worked with such local vendor partners in the DMV region as Dolcezza’s Gelato, Saya Slatena, Sweet Dames and Vigilante Coffee. Foxtrot currently carries more than 175 local products from 50-plus local makers and will continue to add new brands to its shelves. Even beyond placement in its stores, Foxtrot supports local makers and fosters diversity through its annual Up & Comers awards, which is currently accepting submissions until April 4.

Earlier this year, Foxtrot closed $100 million in Series C funding, bringing total funds raised to $160 million. The investment will enable the company to reach its goal of opening 50 new stores over the next two years. Foxtrot plans to make its debut in Austin, Texas, this year. In 2023 and beyond, the company will continue to expand in its current regions and enter new markets, with eyes on New York, Nashville and Miami.

Chicago-based Foxtrot operates 18 locations in Chicago; Washington, D.C.; and Dallas. Shoppers can use the Foxtrot App or the company website for 30-minute delivery and five-minute pickup of such items as local beers, fine wines, chef-prepared meals and everyday essentials.