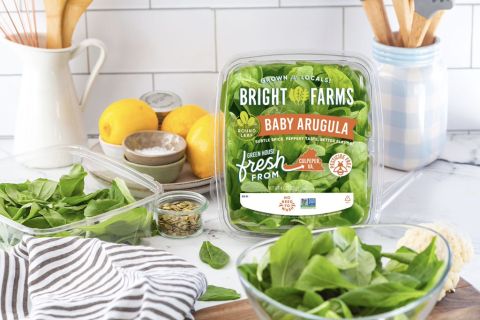 BrightFarm's Culpeper, Va., greenhouse will supply all of the more than 330 Food Lion stores in the state of Virginia with fresh salad greens

The more than 330 Food Lion stores in the state of Virginia will offer salad greens grown by BrightFarms, a supplier of locally grown salads for supermarkets, as part of the grower’s expansion of Mid-Atlantic distribution with retail partner Ahold Delhaize USA, Food Lion’s parent company. The greens will come from BrightFarms’ Culpeper, Va., greenhouse.

The move will expand BrightFarms’ reach into Virginia Beach, Williamsburg and communities in western Virginia, as well as strengthening its presence in Charlottesville, Richmond and Norfolk, growing the company’s customer base and making its local, pesticide-free produce accessible to more consumers. Food Lion will carry such varieties as Sunny Crunch, Baby Spinach, Spring Mix, Baby Arugula and Mixed Greens, all marked on the packaging as having been grown in Culpeper.

BrightFarms operates hydroponic greenhouse farms in the communities it serves, which the company says enables it to eliminate time, distance and costs from the food supply chain.

“Food Lion is committed to providing locally sourced, fresh, healthy and affordable produce for our customers across the towns and cities we serve,” said Chris Dove, Food Lion’s VP of produce category and merchandising. “We’re excited about this expanded partnership with BrightFarms, which will expand our ability to deliver to our Virginia customers the high-quality, locally grown salad greens they expect from Food Lion.”

BrightFarms salad greens are already sold in the Mid-Atlantic region at more than 160 Giant Food stores, and in The Giant Company locations in Pennsylvania. Both are also Ahold Delhaize USA banners.

“Ahold Delhaize USA is a leader in local produce,” noted Steve Platt, CEO of Irvington, N.Y.-based BrightFarms, which supplies locally grown produce to consumers nationwide. “Since launching with Giant Landover in 2016, we’ve been fortunate to partner with several of their brands. With our increased capacity on the East Coast, we’re thrilled that we now have the opportunity to supply Food Lion’s Virginia stores with our fresh, delicious and pesticide-free greens.”

BrightFarms is currently planning its first facility in North Carolina, a 280,000-square-foot hydroponic greenhouse in Henderson County that is expected to deliver up to 2 million pounds of local leafy greens and herbs to supermarkets in the region.

Salisbury, N.C.-based Food Lion has more than 1,000 stores in 10 Southeastern and Mid-Atlantic states and employs more than 63,000 associates. Parent company Ahold Delhaize USA, the U.S. division of Zaandam, Netherlands-based Ahold Delhaize is No. 4 on Progressive Grocer’s 2019 Super 50 list of the top grocers in the United States.