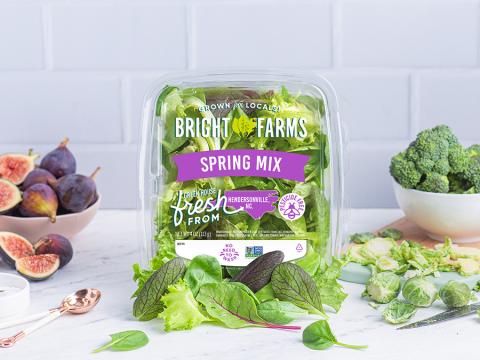 BrightFarms products from the company's latest greenhouse will be marketed as having been grown in Hendersonville, N.C.

BrightFarms is growing again: The locally grown packaged salad brand will expand into North Carolina with a new 280,000-square-foot hydroponic greenhouse in the Tar Heel State’s Henderson County. The new facility is poised to deliver up to 2 million pounds of local leafy greens and herbs to supermarkets in North Carolina and nearby states.

Construction on the greenhouse is expected to begin in early 2020, a BrightFarms spokeswoman told Progressive Grocer.

According to the Irvington, N.Y.-based company, the North Carolina expansion is the result of strong demand from consumers and retailers in the region. Since its debut in 2013, BrightFarms has spurred incremental growth in the salad greens category for its retailer partners in markets across the Mid-Atlantic and Midwest.

“Americans want produce that’s fresh, safe and clean,” asserted BrightFarms CEO Steve Platt. “It’s the reason that locally grown has become the No. 1 purchase driver in produce for supermarkets. We are incredibly grateful for the support from Gov. [Roy] Cooper and the North Carolina Department of Commerce and look forward to bringing local, pesticide-free leafy greens to North Carolina and neighboring states.”

For his part, Cooper noted that BrightFarms’ “sustainable farming will conserve water, land and energy resources and improve the health of North Carolinians.”

The North Carolina greenhouse is the latest addition to BrightFarm’s network of sustainable local farms. The company currently operates facilities in Pennsylvania, Virginia, Illinois and Ohio. Each greenhouse delivers fresh, pesticide-free baby greens to supermarket partners in as little as 24 hours after harvest. The brand offers a full lineup of salad greens and herbs, including baby spinach, its top item.

"The new greenhouse will serve local markets, including Charlotte, N.C.; Winston-Salem, N.C; Greenville, S.C.; Spartanburg, S.C.; and Atlanta," the company spokeswoman told PG, adding, "BrightFarms is currently in discussions with a variety of retailers and has not announced specific retailers in these markets yet."