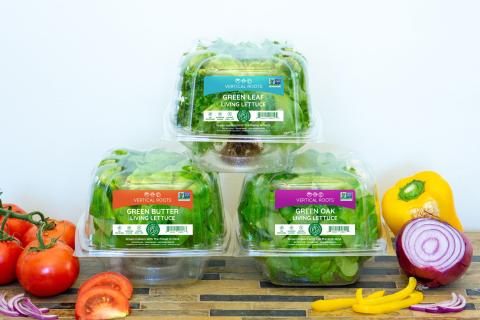 Food Lion has expanded its hydroponic produce selection with the introduction of Vertical Roots lettuce at 303 stores in the Southeast.

Continuing its quest to provide more natural and organic food items, Food Lion has partnered with Vertical Roots, a vertical farm and consumer produce brand, to provide hydroponic lettuce to 303 Food Lion grocery stores across the Southeast. The new partnership validates the consumer's growing awareness of the benefits of vertical farming.

Vertical Roots farms are global food-safe certified by USDA and FDA, and its produce is non-GMO certified and grown without harmful pesticides or chemicals of any kind. Because its produce is harvested, packaged and shipped on the same day, Vertical Roots products boast long-lasting freshness for up to 21 days.

Food Lion revealed in November that it was unveiling a new and improved shopping experience with a $127 million investment in the remodeling of 87 stores in Georgia, Kentucky, North Carolina, South Carolina, Tennessee and Virginia. Among the changes are including more locally sourced items and more natural and organic foods. Food Lion grocery stores now offer Vertical Roots' line of hydroponic Living Lettuces, including Green Butter, Green Oak and Green Leaf, as well as large-leaf lettuce mixes.

Rapidly expanding Vertical Roots is now available at more than 2,000 grocery stores in 13 states across the Southeast and Mid-Atlantic regions.

"Our new retail partnership with Food Lion is evidence of both our strong retail partnerships and the significant demand for regionally grown hydroponic produce among consumers, which is expanding to value shoppers," said Andrew Hare, co-founder and general manager of Vertical Roots. "As a company of modern technology-enabled farmers, we are 100% committed to delivering clean, healthy and sustainable food to all the communities in which our products are sold, and focused on making our produce accessible to as many people as possible."

Vertical Roots operates the largest vertical container farm enterprise in the country, with its headquarters and R&D center in Charleston, S.C., and farm sites in Atlanta; Columbia, S.C.; and Charleston. The company continues to expand its existing farm sites and is set to open multiple new farm locations in centrally located, high-demand regions in 2022. Its hydroponic farms are designed and engineered by AmplifiedAg Inc., an indoor-agriculture tech company that manufactures turnkey vertical farms using refurbished reefer shipping containers controlled by its proprietary hardware and farm management software.

Salisbury, N.C.-based Food Lion has more than 1,100 stores in 10 Southeastern and Mid-Atlantic states, and employs more than 82,000 associates. Its parent company, Ahold Delhaize USA, a division of Zaandam, Netherlands-based Ahold Delhaize operating more than 2,000 stores across 23 states, is No. 10 on The PG 100, Progressive Grocer’s 2021 list of the top food and consumables retailers in North America.