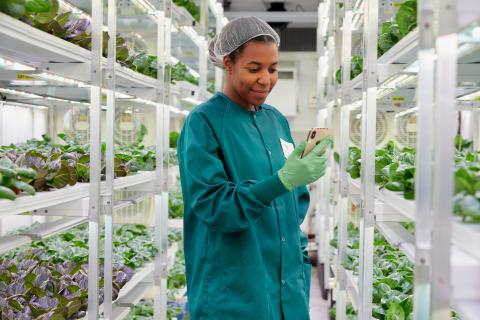 Hydroponic farming company Vertical Roots is growing its footprint with a new indoor lettuce farm in the Atlanta area.

The future of indoor farming, including vertical farming, has nowhere to go but up. With parallel and perhaps inevitably colliding trends of sustainability, plant-based eating, food safety and labor-saving agricultural practices, produce grown in controlled environments is likely to become much more common in grocery stores.

As a testament to the sunny future of the ag tech niche, the U.S. Department of Agriculture started a new Office of Urban Agriculture and Innovative Production last year. More than $3 million in initial grants were made available through that department in 2020.

Prognosticators have weighed in on a future of food that includes strategically located indoor farms throughout the country. In a report released late last year, Allied Market Research, whose Americas office is in Portland, Ore., projected that the global vertical-farming industry is expected to reach $1.38 billion by 2027, with a compound annual growth rate (CAGR) of 26.2% from 2021 to 2027.

Several grocers are already buying into this type of produce supply. Earlier this year, The Kroger Co., based in Cincinnati, began sourcing fresh produce from Hamilton, Ohio-based indoor grower 80 Acres Farms for the retailer’s stores in Ohio, Indiana and Kentucky. In 2020, Kroger partnered with German startup Infarm to add modular vertical farms to two of its Quality Food Centers in the Seattle area.

Also last year, Publix Super Markets said that it will invest more in hydroponic produce and added a new on-site trailer farm from a local hydroponic grower to its GreenWise Market store in the grocer’s hometown of Lakeland, Fla. Boise, Idaho-based Albertsons Cos. has collaborated with South San Francisco, Calif.-based Plenty and with Bowery Farming, based in New York, to provide its shoppers with fresh produce grown indoors. Natural and organic retailer Whole Foods Market, based in Austin, Texas, recently added a mini-farm from New York-based Farm.One to one of its Big Apple stores to provide herbs for prepared pizzas and drinks. In addition to these and other large grocery players, smaller chains and independents have teamed up with various greenhouses and growing operations near their locations.

Consumers have expressed their opinions about produce grown indoors. According to the 2021 “Power of Produce” report published by Arlington, Va.-based FMI – The Food Industry Association, and conducted by San Antonio-based 210 Analytics, 43% of shoppers don’t have a preference for produce coming from indoor versus outdoor farms. Those most likely to prefer indoor growing include urbanites, consumers with above-average spend per person, members of the Generation Z age demographic, higher-income households, core value-added shoppers, organic produce buyers and men. Those more likely to prefer outdoor-grown produce include consumers in rural areas and conventional produce buyers, the report found. 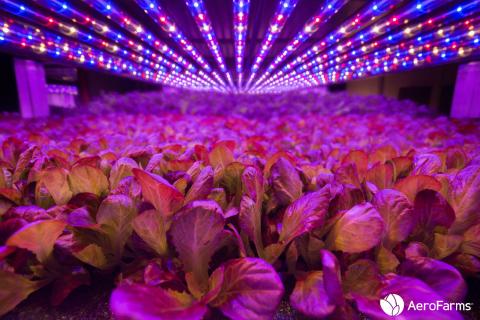 AeroFarms uses aeroponic methods to grow healthy plants, using up to 95% less water and no pesticides.

One of the biggest drivers of the move to produce more food in indoor-farming facilities is sustainability. From an environmental standpoint, indoor-grown produce may be part choice, part necessity, depending on the area and the circumstances.

Necessity is born of conditions wrought by continual weather extremes that are often attributed to a changing climate. Unusual weather patterns resulting in droughts, floods, storm damage and harmful freezes take a toll on traditional farms and on the farmers who grow fresh fruits and vegetables.

Weather extremes have always happened, but are becoming more frequent. For example, coming off last summer’s devastating derecho event, a drought that began in late 2020 in Iowa and has continued through early summer is stressing that state’s corn and soybean crops. Earlier this year, rare heavy snow, ice and frigid temperatures in Texas hurt winter wheat and some citrus crops.

At the same time, there’s an overall push to produce food in a more sustainable way. More than two-thirds (64%) of American consumers say that they’re willing to pay a premium for environmentally friendly products. “There is a trend – not a fad – of consumers who appreciate the benefit of getting produce soon after it’s harvested,” says David Rosenberg, co-founder and CEO of vertical-farming leader AeroFarms, based in Newark, N.J., “and more and more customers are realizing that they want products with no pesticides, because those are not meant for human beings.”

On the business side, sustainability is a central part of many CPGs’ and grocers’ corporate- responsibility platforms as they pledge to reduce their use of resources like water and energy. Many manufacturers and retailers have also revealed goals to cut down on or eliminate the use of pesticides in their products.

Other Seeds of Change

In addition to the pursuit of sustainable growing practices, other factors are contributing to interest in this method of agriculture. The need to shore up food security in the face of a booming global population and the problem of urban food deserts are notable catalysts. So is consumers’ penchant for eating more fresh plant-based foods, and foods grown in a more sustainable way.

Meanwhile, as evidenced in ubiquitous “Now hiring” signs, it can be tough to find workers to plant, care for and harvest crops. Indoor farms run with several automated controls and tasks are less affected by fluctuations and stresses in the labor market.

The global COVID-19 pandemic also contributed to the acceleration of indoor farming. When some retailers faced supply chain issues and had difficulty sourcing fresh products, they turned to new vendor partners that operated indoor farms with more controlled conditions and inventories. Indoor farms typically can be built faster and are also versatile operations that allow for pivots in the event of changing circumstances.

There are additional practical reasons for sourcing produce from indoor growers. “Right now, retailers want consistency in price, quality and delivery. At its core, we are delivering consistency,” notes Rosenberg, citing other profit-driven benefits such as reduced shrink and spoilage. 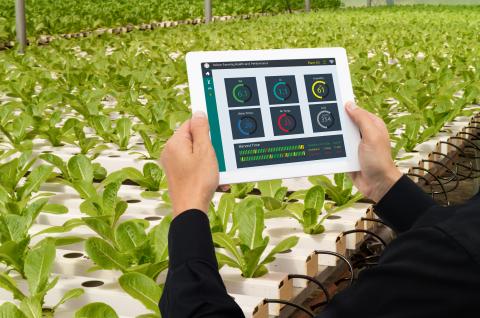 Generally, plants in indoor-farming facilities are grown in cells stacked for space savings and efficiency. In lieu of the sun, LED lights are used to facilitate growth.

Watering techniques vary. In hydroponic farms, plant roots are placed in nutrient-rich solutions instead of soil. With aeroponics, exposed roots hang down from the plant and receive nutrients via a system that sprays nutrient-filled water.

Indoor farms take different forms in the United States and around the world. Some indoor farms are massive in size and almost industrial in their setup. Others are smaller and hyperlocal, using locations like repurposed shipping containers or greenhouses. Some farms are constructed vertically to minimize the physical footprint or to use existing buildings, while others are more spread out in their design. Farms are being built in urban areas, often in former manufacturing facilities, warehouses or multilevel stores, and in more rural areas, where they are run by longtime family farm owners who are looking for ways to reinvent their businesses in the wake of competition from big farms.

One thing is for sure: There are more of these types of growing operations. AeroFarms is one grower on the march, with a l36,000-square-foot aeroponics farm under construction in Virginia, set to be finished sometime in 2022.

In June, Vertical Roots, a Charleston, S.C.-based hydroponic container farm that’s part of Amplifed Ag, opened its third indoor farm in Atlanta at a facility run by two large produce suppliers in the Southeast. According to the company, the new farm will eliminate the need for transportation to the distributor and will enable produce to be delivered to local customers the same day that it’s harvested.

In mid-June, Morehead, Ky.-based grower AppHarvest revealed that it’s adding two large indoor farms in the Bluegrass State. With a completion date of the end of 2022, the farms will produce non-GMO leafy greens and fruits for shipment to grocers and restaurants.

Also in 2021, Irvington, N.Y.-based BrightFarms opened its newest indoor farm, in Hendersonville, N.C., a 6-acre greenhouse that will deliver to retailers in nearby areas in that state, as well as in South Carolina and Georgia.

In another sign of the health of this sector, there’s major seed money – no pun intended – going toward indoor farming. Berlin-based Infarm, for example, is said to be going public following a reported merger with Kernel Group Holdings Inc., of San Francisco. In May, Bowery Farming revealed a new round of funding to the tune of $300 million that lifted the company’s estimated value to about $2.3 billion. Indoor-farming company Gotham Greens, based in Brooklyn, N.Y., revealed $87 million in new funding in December 2020.

While indoor farms are expanding, crops produced in such facilities are expected to grow, too.  Most ag tech companies currently produce leafy greens and herbs in hundreds of different varieties. Tomatoes are also grown hydroponically in many places. Better technologies and a greater collective knowledge are spurring innovations in other types of crops grown indoors in an eco-friendlier way. AppHarvest, for its part, is growing strawberries in one of its new locations, and vine crops in another.

Implications for the Retail Produce Section

More and different types of indoor farms are transforming agriculture – and the retail produce department.  Since many of these products are packaged on site, supermarket produce sections now feature a greater mix of packaged and bulk items. Offerings like packaged salads and tomatoes also help define and elevate a brand, whether it’s a store brand or a grower brand.

Coming off a year in which consumers prepared more foods and experimented with new products and varieties, several new products grown in indoor-farming facilities have hit the marketplace. Medford, Minn.-based Revol Greens recently rolled out new varieties of chopped romaine salads made with lettuces grown at its indoor farm in its home state. Revolution Farms, in Caledonia, Mich., is launching four new salad mixes. One of Bowery Farming’s latest products is a new Bowery Crispy Leaf Lettuce, deemed to be a “reinvigorated version” of iceberg lettuce. And that’s just the tip of the iceberg (lettuce).

Grocers can merchandise indoor-farmed produce in a creative way to distinguish their offerings and connect with shoppers. “We’ve worked in a process of co-creating with retailers,” observes AeroFarms’ Rosenberg. “It is an opportunity to deliver innovation and excitement for an exciting category.”