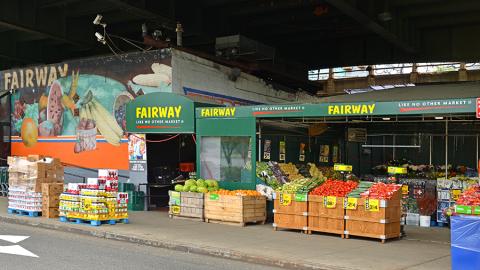 Despite the auction that resulted in winning bids for several of its stores, Fairway is still operating all of its locations to meet the public need for its products

The virtual auction of Fairway’s stores has wrapped up, and the bankrupt New York-based grocer has revealed the winning bids for several of its 14 stores.

Five stores, including five in Manhattan, and a production and distribution center went to Springfield, N.J.-based Village Super Market Inc., part of the Wakefern Food Corp. cooperative, for about $76 million, apparently beating out rival bidder Bagopa Enterprises Inc., and one Brooklyn store went to Seven Seas Georgetowne LLC, a member of the Staten Island, N.Y.-based Key Food co-op, for around $5 million, while the real estate leases for the Paramus and Woodland Park, N.J., locations went to Seattle-based Amazon for $1.5 million, two fewer than the company was reported to be interested in. The New York Post has speculated about whether the ecommerce behemoth would use the sites as distribution centers or as brick-and-mortar stores.

Village Super Market has expressed interest in retaining the iconic Fairway banner for its acquired locations.

Fairway is continuing to operate all of its stores, including those not sold during the court-supervised auction, and plans to do so for the time being to meet the current public need for its products amid the coronavirus outbreak.

“These Fairway stores and DC employ over 1,500 people, who have been doing heroic work responding to our local exigency during the ongoing crisis, clearly demonstrating the critical role our supermarkets play in communities all around the country,” noted Scott Moses, managing director and head – food retail and restaurants investment banking at New York-based PJ Solomon, which is acting as the M&A investment banking advisor to Fairway. “It is an honor to serve the Fairway team as they rise to the challenge and help sustain New York area families during this difficult period.”

When asked by Progressive Grocer when the winning bidders would take possession of their properties, Moses replied that it “varies by contract but likely over the next couple of months.”

The largest retailer-owned cooperative in the United States, Keasbey, N.J. based Wakefern comprises 50 members that independently own and operate 353 supermarkets under the ShopRite, The Fresh Grocer, Price Rite Marketplace and Dearborn Market banners in New Jersey, New York, Connecticut, Pennsylvania, Maryland, Delaware, Massachusetts, New Hampshire, Rhode Island and Virginia. Together with its member companies, Wakefern, which is No. 8 on PG’s 2019 Super 50 list of the top grocers in the United States, employs more than 70,000 people, and is one of the largest employers in New Jersey.

Under the Austin, Texas-based Whole Foods Market banner, Amazon is No. 10 on the list.