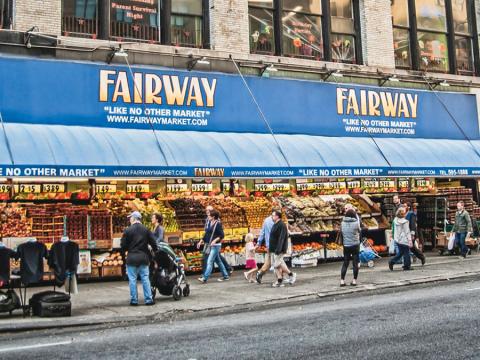 A day after denying that it was filing for Chapter 7 bankruptcy and going out of business, New York metro grocer Fairway Market has revealed that it filed a voluntary petition under Chapter 11 of the U.S. Bankruptcy Code in the U.S. Bankruptcy Court for the Southern District of New York on Jan. 23 and entered into a stalking-horse asset purchase agreement with ShopRite operator Village Super Market Inc. to sell its five Manhattan stores and a distribution center for about $70 million.

Additionally, Fairway will begin a court-supervised sale process to continue negotiations for the sale of its nine remaining stores. An ad hoc group of the company’s senior lenders has agreed to provide Fairway with up to $25 million in debtor-in-possession financing.

The move confirms part of The New York Post’s anonymously sourced report this week that Village Super Market was interested in purchasing a “handful” of Fairway’s stores.

During the court-supervised process, Fairway said it would continue to run its stores, with no interruption in service, and that all existing customer promotional and loyalty programs would remain in place.

“We would like to extend gratitude to our employees, vendors, distributors and customers for their support, dedication and loyalty over the years,” said Abel Porter, CEO of New York-based Fairway.  “It has always been Fairway’s priority to ensure our patrons are provided with the most optimal grocery experience, with the freshest foods and best-quality products, and our employees feel appreciated. After careful consideration of all alternatives, we have concluded that a court-supervised sale process is the best way to meet our objectives of preserving as many jobs as possible, maximizing value for our stakeholders, and positioning Fairway for long-term success under new ownership."

“Perry and Nick Sumas opened the first Village Market in 1937, and our family continues to believe deeply in the importance of neighborhood grocery stores,” said Robert Sumas, CEO of Springfield, N.J.-based Village Super Market, which operates 30 supermarkets and specialty markets in the Northeast under the ShopRite and Gourmet Garage banners. “We appreciate that Fairway’s loyal customers are concerned about the future, and if we are successful in our bid, we are committed to keeping Fairway, including its name, unique product selection and value, a part of this community.”

The largest retailer-owned cooperative in the United States, Keasbey, N.J.-based Wakefern comprises 50 members that independently own and operate 353 supermarkets under the ShopRite, The Fresh Grocer, Price Rite Marketplace and Dearborn Market banners in New Jersey, New York, Connecticut, Pennsylvania, Maryland, Delaware, Massachusetts, New Hampshire, Rhode Island and Virginia. Together with its member companies, Wakefern, which is No. 8 on Progressive Grocer’s 2019 Super 50 list of the top grocers in the United States, employs more than 70,000 people, and is one of the largest employers in New Jersey.

“Fairway’s iconic Manhattan stores include some of the most productive supermarkets in the United States and employ hundreds of people,” noted Scott Moses, managing director and head – food retail and restaurants investment banking at New York-based PJ Solomon. “This transaction helps to secure those jobs and the legacy of this unique New York City foodie experience, which has been a pillar of our community for generations.”

The grocer last filed for Chapter 11 bankruptcy protection in May 2016, emerging in July of that year with one fewer store and a new board of directors, after its senior lenders voted for a plan to swap their loans for common equity and $84 million of debt of the restructured company, and it secured $55 million in financing from some of its creditors to aid its reorganization, as well as to fund the daily operation of its business. At that time, a consortium including Blackstone Group’s GSO Capital Partners succeeded Sterling Investment Partners as Fairway’s owner. Fairway is currently owned by lead shareholders Brigade Capital Management and Goldman Sachs Group.