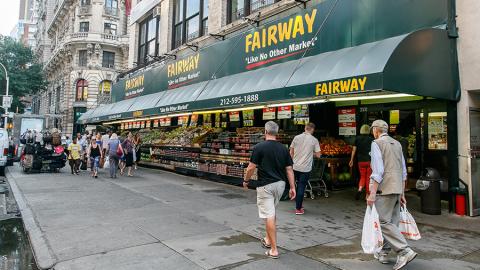 New York metro area grocer Fairway Market is poised to file for bankruptcy for the second time in almost four years after failing to find a buyer for its 14 locations, including its famous flagship store on Broadway and West 74th Street in Manhattan, according to a published report.

“If they are selling their flagship store, which makes all the money, this could be a liquidation instead of a reorganization,” a “well-placed source” told the New York Post.

The Post traced Fairway’s declining fortunes to 2007, when the Glickberg family, four generations of which had run the company since 1933, sold an 80% stake to private equity firm Sterling Investment for $140 million. Sterling’s ambitious growth plan, with the aim of luring suburban shoppers, ended up saddling Fairway with $300 million in debt. The private equity company took Fairway public in 2013 and worked to build the local grocer into a national chain with 300 stores, including many in the suburbs.

In May 2016, Fairway filed for Chapter 11 bankruptcy protection. It was subsequently bought out of bankruptcy by an investment arm of Blackstone, GSO Capital, which recently sold its stake, and is currently owned by lead shareholders Brigade Capital Management and Goldman Sachs Group.

The grocer has already begun closing stores: Its 65,000-square-foot store in Nanuet, N.Y., closed in September, with two stores in Paramus and Woodland Park said to be the next in line to go dark. Half of its stores — the ones reportedly in the direst financial straits — are in the Long Island, Connecticut and New Jersey suburbs, and no buyers are stepping up to take on these struggling stores and the company’s massive debt, sources told the Post.