While many restaurant dining rooms across the country are shuttered during the coronavirus pandemic, consumers are desperate to bring the foodservice experience into their homes.

In Philadelphia, where restaurants are closed for in-person dining, consumers are lining up (virtually) to make a reservation for dinner at Apricot Stone. Customers call Chef Ara Ishkhanian via video chat to go over the menu; candles, background music and the sound of water filling glasses is included. Later, dinner arrives to the customer via Grubhub.

Meanwhile, DoorDash has rolled out initiatives to bring the dine-in experience home with a new program called The Lunchroom. The company has partnered with The Cheesecake Factory, Outback Steakhouse and other chains to bring a bit of their physical locations online through video chat backgrounds and curated Spotify playlists.

Clearly, quarantined consumers want to re-create the atmosphere of going out to a restaurant as much as possible within the walls of their own homes. For manufacturers and suppliers of charcuterie, the opportunities to help consumers fulfill this need couldn’t be better. After all, charcuterie, and frequently cheese, aren’t just snacks or meals; they’re also an experience.

“So far, COVID-19 hasn’t had an impact on our consumers’ habits, other than changing where it’s eaten, with everyone quarantined inside their homes,” says Emanuela Bigi, marketing manager at Veroni, an Italian charcuterie company in Logan Township, N.J. “For the 2020 consumer, it’s similar to enjoying an indulgent restaurant experience with your family, or small gatherings in the comfort of your own home, at a fraction of the cost.”

Before the pandemic, charcuterie was enjoying a renaissance as the kind of authentic, experiential meal that today’s savvy consumers are yearning for. 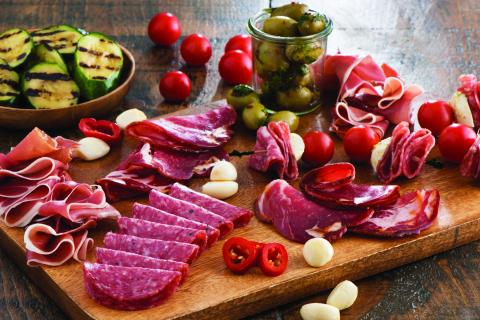 “Charcuterie,” a French term, can be interpreted in many ways. Most retailers and suppliers define it as a do-it-yourself approach to an assortment of cured meats, cheeses and other accompaniments such as crackers, dried fruits, jams and spreads, olives, nuts, and breads.

For Fiorucci Foods, charcuterie has been a staple behind the brand’s heritage for 170 years, bringing together a wide array of Italian meats, cheeses and snacks.

“Charcuterie has grown steadily over the years, primarily in fine-dining restaurants, and now we are seeing that trend cross over to the retail grocery environment, especially during the holiday season,” says Shawn Munck, director of marketing for European brands at Colonial Heights, Va.-based Fiorucci. “We believe charcuterie will be adopted by more than just foodies in the coming years, becoming more mainstream as a way for people to express their creative freedom when preparing food for themselves and their families.”

Five years ago, a consumer heading to the grocery store for cold cuts or a party platter might stop by the deli for some sliced Swiss cheese and Virginia ham. Today, that consumer is increasingly looking for Italian salami to build the kind of charcuterie-and-cheese platter or board they would have previously found on a restaurant menu.

“The charcuterie category’s amazing evolution has grown to heights where charcuterie is now transforming the way shoppers view their deli,” asserts Evan Inada, charcuterie/partnerships director at San Francisco-based Columbus Craft Meats, a division of Hormel Foods. “Retailers are understanding that their charcuterie category is the best way to showcase all of their specialty meats, cheese, crackers, nuts, olives, chocolates, etc., while providing a heightened grocerant experience to their shoppers.” 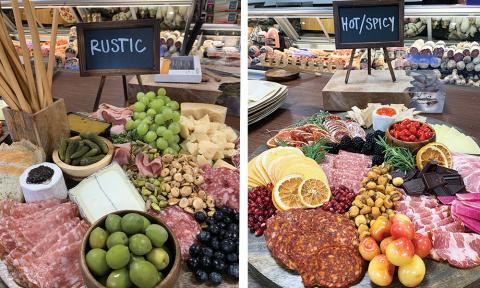 Columbus Craft Meats helps retailers create in-store charcuterie destinations. Customers should be educated and trained in how to create a diverse array of beautiful charcuterie boards.

The charcuterie category continues to grow in the United States, with many new producers and charcuterie offerings now available, according to Veroni’s Bigi. It appears to be a long-term lifestyle change; older generations have traditionally driven the category, but now younger consumers are attracted to the attributes of a high-protein, gluten-free, flavor-packed, versatile and ready-to-eat solution as a snack or meal.

The snacking and protein diet trends have also created a whole new category of small artisan salame sticks, bites and snack packs. Indeed, charcuterie has evolved from being treated as a “plating suggestion or recipe” to now becoming the strongest category in the deli, making up a majority of the growth behind the glass, Inada notes.

Bolstering that viewpoint, Chicago-based Information Resources Inc. (IRI) points to 3% total dollar sales growth in refrigerated packaged sliced lunchmeats during the 52 weeks ended March 22. Deli department sales totaled $5.7 billion during the same period, an increase of 3% also. The growth engine for much of that deli department growth going forward might well come from premium products such as charcuterie. Why? The consumer is looking for premium food products that deliver on the three key factors that charcuterie is known for:

Today, a fourth factor influencing charcuterie’s growth is that the pandemic consumer is looking for experiential food that also has a longer shelf life.

“COVID-19 has changed the way people socialize with friends and family, but it doesn’t change the way that charcuterie can be enjoyed,” Inada observes. “Having salami and aged cheeses in my fridge has personally been a blessing, because their shelf life is so long compared to cooked or fresh items. I’ve been just taking a few slices of salami a day, and making charcuterie with the random assortment of canned olives, nuts and dried fruit I have on my shelves, to put me in my happy place while I stay in place.” 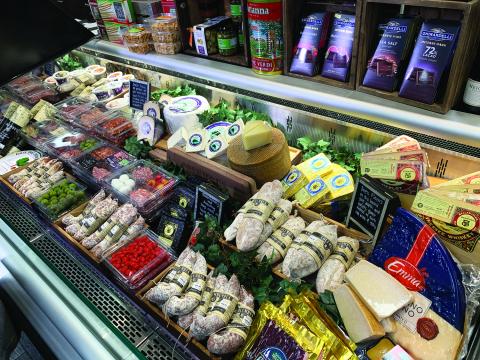 In a March 31 webinar put on by IRI and the Food Industry Association — FMI, Joan Driggs, VP of thought leadership at IRI, said that levels of anxiety are rising during the pandemic. Socially isolated consumers may seek comfort in treats, snacks and alcohol, which Driggs called “affordable joys.”

“Retailers should really be taking note of these purchases, because as more of that food dollar shifts back into the home, Americans are going to want to re-create some of those social consumption occasions that foodservice really used to offer,” she said. “It could be a cup of coffee and a baked good, or a cocktail and an appetizer.”

It could also be a charcuterie board or a really good hunk of cheese.

According to the nation’s largest farmer-owned organic cooperative, Organic Valley, consumers are now clamoring for cheese across all times of the day and meal occasions, given the popularity of protein and the exploding diversity of products. 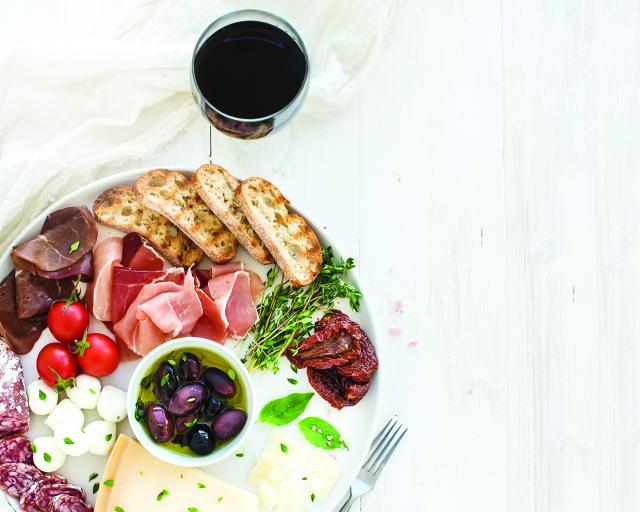 “We are seeing a shift in the way people are buying cheese, migrating from mainstream, everyday brands shelved in dairy to more niche specialty brands shelved in the deli sections of stores,” says Aaron Aslin, brand manager at La Farge, Wis.-based Organic Valley. “This appears to be an outcome of consumers’ desires for more premium, higher-quality and flavor-adventurous types of cheeses.”

When it comes to pandemic buying behavior, Aslin notes that cheese consumption has changed due to social distancing, and that shift is benefiting grocers.

“The pandemic has caused an increased demand in retail grocery,” he says. “We are working closely with our processors to maintain service levels to the stores.”

The sales data backs Aslin’s claim: Dollar sales of natural cheese were up 5.4% for the 52 weeks ending March 22, according to IRI, while sales of processed cheese were up 3.4%.

Cheese spreads were top sellers, with 6.8% sales growth during the same period. In the subcategories, cubed cheese was up an incredible 17.6%. It’s clear that new product introductions geared toward snacking and increased consumer interest in diverse flavors are important trends affecting the category.

“A lot of smaller and single-serve options have been introduced the last couple of years,” says Luke Buholzer, VP of sales at Monroe, Wis.-based Klondike Cheese Co.

“Snacking and eating on the go have become more popular with a wide variety of cheeses, also cheese that has already been converted for final use. Pre-shredded, grated, crumbled, sliced packages are still gaining market share in the specialty cheese category.”

Retailers looking to leverage the power of cheese, as the third-largest CPG category in the United States, to drive store traffic should consider new merchandising strategies that bring novelty along with familiarity to maximize shopper interest and engagement, according to Organic Valley’s Aslin. At the end of the day, if a retailer delivers a strong cheese portfolio, consumers will come. 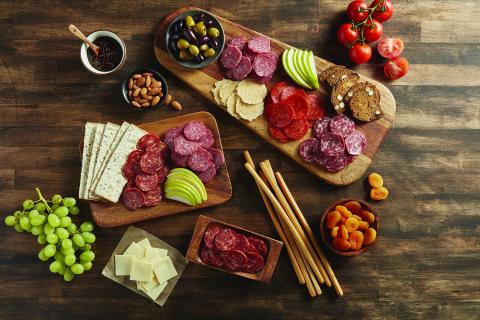 “There has been some opportunity to touch the consumer by placing cheese in multiple parts of the store and pairing it with other products,” points out Teena Buholzer, marketing director at Klondike. “It may spark a creative idea in a shopper to use cheese in ways they may not have thought of originally. Convenient snacking options, which is a growth area for cheese, can be placed in a variety of locations around stores. Quick and easy entertaining options are in demand, and merchandising a cheese bunker by placing a variety of cheeses in the case that pair and present well together, so a consumer can easily grab and create their own charcuterie board.”

Adding to the Supporting Cast

Quality, authenticity and big flavor are the keys to growth in charcuterie and cheese. As for what’s next, the biggest recent trend in the charcuterie space is that retailers are creating a merchandised set focused on charcuterie and moving away from traditional grocery silos, Columbus’ Inada says. 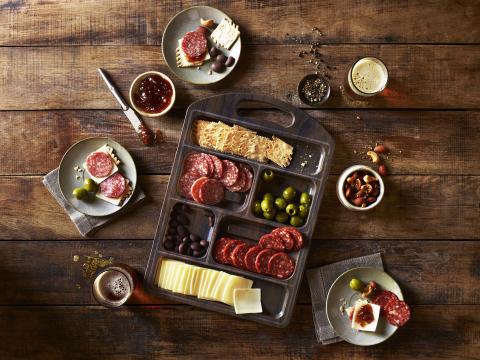 “Salami and specialty cheese remain the focus of the display, but the supporting cast of specialty goods merchandised has broadened,” he notes. “Candied bacon, chocolates and pickled products are perfect ways to elevate all the salami and cheese on a board, and markets love the increased basket size that comes with a charcuterie purchase.”

As much as consumers are demanding more charcuterie and cheese products, however, few of them actually know how to make a charcuterie board on their own, let alone what to shop for. Going forward, more education from retailers will help drive even bigger growth.

“By merchandising all the elements that make up charcuterie in a focused section of the deli/cheese floor space, retailers are giving the consumer a structured outline of how they will create their perfect charcuterie experience,” Inada says. “With a majority of charcuterie items being high-margin products, retailers are seeing their deli and specialty category profits grow exponentially with this focused attention to merchandising. Wherever you want to make a statement in your marketplace is the best area for charcuterie and specialty cheese.”