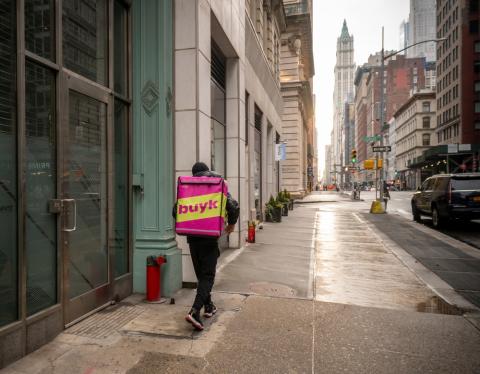 Following its launch in New York City just three months ago, Buyk has expanded its operations to Chicago.

Following its launch in New York City just three months ago, Buyk is setting up its ultrafast grocery delivery operations in Chicago with six dark stores, bringing the company’s total to 35 stores across both cities.

Buyk uses its proprietary technology stack, combined with a network of strategically located dark stores, or new-generation micro-fulfillment centers, to deliver groceries and other essentials to customers’ doorsteps within 15 minutes, with no delivery fee and no minimum spend. Buyk co-founders Slava Bocharov and Rodion Shihskov are also co-founders of Samokat, one of Europe’s fastest-growing ultrafast delivery services and the largest operator of dark stores among on-demand grocers outside of China.

In Chicago, the service will initially cover the Wicker Park, Bucktown, Old Irving Park, Ravenswood, Sheffield Neighbors and Logan Square neighborhoods. Buyk plans to open another 14 dark stores in Chicago by the end of the first quarter of 2022. Buyk also aims to further expand its in-app offering to include a broad selection of Chicago’s local favorites.

“Chicago is where trends, especially in retail, become mainstream,” said James Walker, who joined Buyk as CEO in November. “This is why Buyk has chosen the Windy City as the next frontier to disrupt the way Americans get their groceries. We hope that unbeatable delivery speed and quality of products become as synonymous with our brand name as deep-dish pizza is with Chicago! We want to capture this growth momentum and bring this technology not just to big bicoastal metropolises to which so many advancements are limited in the United States. Buyk wants to take instant grocery delivery in the U.S. inland, and our technology, smart unit economics and lean growth strategies will help make this a reality.”

New York and Chicago have become the battlegrounds for tech companies to debut their real-time grocery delivery services, meeting Americans' need for convenience. For example, Istanbul’s Gatir started delivery in Chicago and recently expanded to New York, while Jokr and German startup Gorillas both had initial launches in the New York City area.

Ahead of its Big Apple debut, Buyk raised $46 million from CM Ventures, Fort Ross, Citius and other investors in a funding round. The real-time retail grocery delivery service has plans to expand further across various U.S. geographies in 2022.