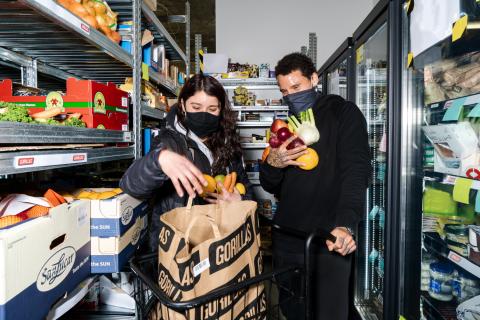 Traffic on the last mile is getting busier. European startup Gorillas, which offers fast-track last-mile delivery by bicycle, is launching operations in the United States on May 30. Gorillas claims to deliver goods from shoppers’ online carts to their desired location within 10 minutes for a $1.80 fee.

Service in this country will start in the New York City area, with availability in neighborhoods including parts of Brooklyn. The company is planning a wider expansion in New York and other major U.S. cities.

Gorillas’ infrastructure is set up for expedited delivery. The Berlin-headquartered company runs micro warehouses in each neighborhood it serves, which are stocked with a variety of grocery items in addition to products from hyperlocal brands and businesses.

“As a result of the pandemic, online grocery delivery has seen steep momentum, but now that this industry has experienced the long overdue propulsion into e-commerce, it will be here to stay,” said Kağan Sümer, CEO and co-founder.

This model is also a bit different, in that riders are provided full-time employment and full-time riders are eligible for benefits such as healthcare, uniforms, bikes and other equipment.

“Our riders are at the heart of everything we do and we’re firmly committed to going against the grain when it comes to the idea of people doing rigorous tasks, like biking urban streets, with limited resources,” remarked Sümer.

Sustainability is built into this delivery model as well. Gorillas is planning to work with local organizations to collect potential food waste from warehouses and transform it into nutritious meals for community distribution. In New York City, for example, the startup is teaming up with the nonprofit Rethink Food organization.

The foray into the United States is only part of Gorillas’ growth, as the company has expanded into more than 25 cities and built up more than 75 micro fulfillment centers in nearly 11 months. The app is currently available to consumers in Germany, the Netherlands, France and the United Kingdom. Earlier this year, Gorillas raised $290 in Series B funding for a valuation exceeding $1 billion.