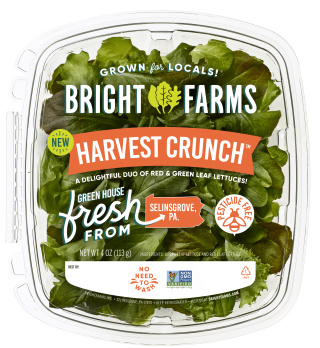 BrightFarms’ distribution recently surpassed 2,000 stores, bringing the hydroponic produce provider’s total store count to 2,009. The company has added more than 800 stores this year amid a record surge in demand that has increased year-over-year sales growth by 40% in the past month. The company’s national retail partners include Ahold Delhaize USA, Kroger banner Roundy’s, Walmart and its Sam’s Club division, and Meijer.

Earlier this year, BrightFarms opened its largest greenhouse to date, in Selinsgrove, Pennsylvania, to meet strong demand from Ahold Delhaize USA in the Northeast.

According to BrightFarms, it’s the first local, controlled-environment leafy greens producer to distribute to more than 2,000 stores. Its expansion comes amidst the release of FMI’s 2020 "Power of Produce” report, which found more than half of consumers want to see a larger assortment of locally grown produce at the supermarket.

“We’re extremely proud of our growth with new and existing retail partners this year,” said Abby Prior, SVP of sales and marketing at Irvington, New York-based BrightFarms. “Our programs continue to drive category growth as consumers seek out the freshest leafy greens in the produce department. We look forward to continuing to introduce the BrightFarms brand to more consumers across the nation in the coming months.”

BrightFarms intends to expand into hundreds of new stores in the third quarter.