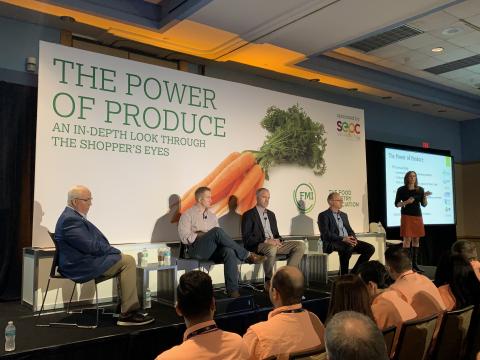 The $61 billion produce category remains the No. 1 differentiator for grocers as they look for a competitive advantage in an increasingly tough retail market.

That’s the consensus from the food retailers and fresh produce growers who gathered at the Southeast Produce Council’s 2020 show in Tampa, Fla., over the weekend.

The Food Industry Association (FMI) debuted its latest report, Power of Produce 2020, at the SEPC event, along with some other new findings about the category.

“Produce is still one of the main ways a store can win or lose,” said Anne-Marie Roerink, principal and founder of 210 Analytics, who moderated a panel featuring FMI VP/Fresh Foods Rick Stein and executives from Target and Ahold Delhaize. “If you look at sales per labor hour, if you look at how produce boosts the basket, produce is the No. 1 way in which consumers decide on one store over another. For retailers, it's not just about getting produce right for the sake of produce, it's about getting produce right for the sake of the entire store.”

But FMI’s Power of Produce report tells us that even the mature and powerful produce category needs to find ways to inspire growth, said Rick Stein, vice president, fresh foods for FMI.

“To that end, we’ve witnessed tremendous strides in recent years for how enhanced produce offerings can inspire consumer demand, as value-added produce alone has grown about 3% in both dollars and volume – three times higher than overall produce,” Stein said.

This wave in convenience-driven merchandising plays directly into consumers’ desire for more information and education regarding produce, whether that’s information about growing practices, nutrition facts recipe ideas or specific medical and health benefits.

In addition to opportunities for health and convenience, the report demonstrates some divides among consumers when it comes to channel choice and packaging. Thirteen percent of shoppers say they buy produce in a different store than where they purchase most of their groceries, and for organic produce shoppers, 27% go elsewhere. Shoppers are also divided in the packaging debate between functionality mattering most (31%), the environment mattering most (35%), or striking a balance between the two (34%).

Other key takeaways from the report include:

And Roerink presented some recommendations at the SEPC show for growing produce sales, including:

The full Power of Produce report can be found here.

They are also looking for retailers to provide leadership on reducing food waste and plastic packaging in the produce department more than ever before.

Walmart’s senior manager for sustainability in produce, Anabella de Freeman, led a panel at the SEPC show that took a deep look into the sustainability pressures facing the industry, including alternative packaging options, projects to improve current materials’ re-use, and the impacts on the supply chain for fresh fruits and vegetables.

“By 2025, Walmart aims to have achieved three things on plastic: One, use less plastic. Two, reuse or recycle as much plastic as we can. By 2025, for example, all of our private brand products will be 100% recyclable. And three, we need to help our customers by offering better labels that indicate how to recycle or reuse,” De Freeman said.

"One way that we can help with plastic reduction is by replacing the clamshell lid on many fruits and vegetables with a top sealed film. You can reduce the amount of plastic used by up to 45% just by replacing the lid of a clamshell with a film seal," Lawrence said.