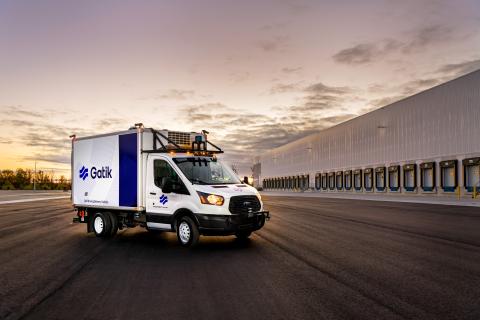 Gatik's medium-duty autonomous trucks operate more than 20 hours a day, seven days a week in Texas’ high-density market, which is well suited to goods movement in a multi-tenancy capacity.

Gatik has expanded customer deployments into Texas and opened a new autonomous-trucking facility in Fort Worth. The new facility serves as a hub for the company’s operations in the Lone Star State, enabling new and existing customers to take advantage of lower supply chain costs, operational efficiencies and shorter delivery times on what Gatik refers to as the “Middle Mile.”

The company has also raised $85 million in Series B funding, led by Koch Disruptive Technologies, to scale its fleet of Class 3-6 autonomous box trucks across new markets in North America.

“Dallas-Fort Worth is internationally recognized as one of the world’s leading logistics centers in terms of innovation, sophisticated infrastructure and a highly skilled workforce,” noted Gautam Narang, CEO and co-founder of Palo Alto, Calif.-based Gatik. “Combined with a dense customer base, a progressive and well-structured regulatory environment, and an ideal climate, bringing the advantages of our Middle Mile solution to customers in the Texas ecosystem was a very natural next step for us.”

Gatik’s Texas operations are expected to create more than 500 new jobs by 2025, among them operational, technical and business roles. The company’s medium-duty trucks operate more than 20 hours a day, seven days a week in Texas’ high-density market, which is well suited to goods movement in a multi-tenancy capacity. This enables Gatik to increase vehicle use and further maximize profit margins and supply chain efficiency for various customers. To support its expansion in the Lone Star State, Gatik has teamed with the AllianceTexas Mobility Innovation Zone (MIZ). Offering the resources and partnerships essential to comprehensively testing, scaling and commercializing new technologies, the 27,000-acre AllianceTexas development is anchored by the world’s first dedicated industrial airport, Fort Worth Alliance Airport; hosts one of the nation’s premier intermodal hubs; and houses 525-plus companies occupying more than 50 million square feet and providing more than 62,000 jobs.

Texas is the fourth North American market in which Gatik has deployed its fleet of autonomous box trucks for retail customers, following successful rollouts in Arkansas and Louisiana with Walmart, and the Canadian province of Ontario with Loblaw Cos. Ltd. In response to rising customer needs spurred by an unprecedented uptick in e-commerce, Gatik has deployed 20- and 26-foot multi-temperature autonomous box trucks to enable real-time delivery of goods.

“Texas continues to thrive as a place of unlimited economic opportunity, and we are proud to welcome a cutting-edge company like Gatik to Fort Worth,” said Texas Gov. Greg Abbott. “This facility will bring hundreds of jobs to the region and will further establish the Lone Star State as a leader in innovation. Gatik’s investment is a testament to Texas’ strong economic climate, robust infrastructure, and our unrivaled workforce. Thank you to Gatik and AllianceTexas Mobility Innovation Zone for their partnership to bring this facility to Fort Worth.”

Since revealing its Series A financing in November 2020, Gatik has launched an industry-first partnership with Isuzu to implement OEM-grade (original equipment manufacturer) redundancies for medium-duty trucks critical for fully autonomous operations.

Bentonville, Ark.-based Walmart operates more than 10,500 stores under 48 banners in 24 countries, and e-commerce websites, employing 2.2 million-plus associates worldwide. Walmart U.S. is No. 1 on The PG100, Progressive Grocer’s 2021 list of the top food and consumables retailers in North America, while Walmart-owned Sam’s Club ranks No. 9 on the list. Brampton, Ontario-based Loblaws, with more than 2,400 stores in Canada and more than 190,000 full- and part-time employees, is No. 12 on PG’s list.