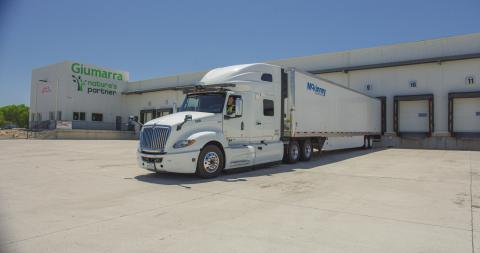 Although the pickup and delivery of Giumarra produce was performed manually with a human driver in a recent pilot, the longest portion of the journey — a distance of more than 900 miles — was done autonomously using TuSimple’s self-driving tech.

The Giumarra Cos., an international network of fresh produce growers, distributors and marketers, and The Associated Wholesale Grocers Inc. (AWG), the nation’s largest cooperative food wholesaler, recently took part in a groundbreaking pilot with the goal of providing faster service, fresher food and less waste.

Earlier this month, autonomous-vehicle company TuSimple picked up a load of fresh watermelons from Giumarra's facility in Nogales, Ariz., and transported the produce across four states to an AWG distribution center in Oklahoma City, Okla., where the fruit was inspected and distributed to Doc’s Country Mart and Homeland grocery stores in the state.

Although the pickup and delivery of the produce was performed manually with a human driver, the longest portion of the journey — from Tucson, Ariz., to Dallas, a distance of more than 900 miles — was done autonomously using TuSimple’s self-driving technology. While a human driver can complete the entire trip in 24 hours and six minutes, TuSimple’s autonomous system was able to do it in 14 hours and six minutes, which is 42% faster.

“Autonomous-trucking technology is a real game-changer for us,” noted Tim Riley, president of the Los Angeles-based Giumarra Cos., “as its time and cost efficiencies provide us with an enhanced opportunity to supply fresher fruits and vegetables across the United States, particularly to food deserts and rural communities.”

“We believe the food industry is one of many that will greatly benefit from the use of TuSimple’s autonomous- trucking technology,” said Jim Mullen, chief administrative officer at San Diego-based TuSimple. “Given the fact that autonomous trucks can operate nearly continuously without taking a break means fresh produce can be moved from origin to destination faster, resulting in fresher food and less waste.”

Among the companies that have been testing autonomous trucks is Walmart, which earlier this year expanded its autonomous-truck pilot with Palo Alto, Calif.-based Gatik from the retailer’s hometown of Bentonville, Ark., to Louisiana to deliver items from a Supercenter to a Walmart pickup point on a 20-mile route between New Orleans and Metairie.

Walmart operates more than 11,300 stores under 58 banners in 27 countries, and e-commerce websites, employing 2.2 million-plus associates worldwide. Walmart U.S. is No. 1 on The PG100, Progressive Grocer’s 2021 list of the top food and consumables retailers in North America, while Walmart-owned Sam’s Club ranks No. 9 on the list.