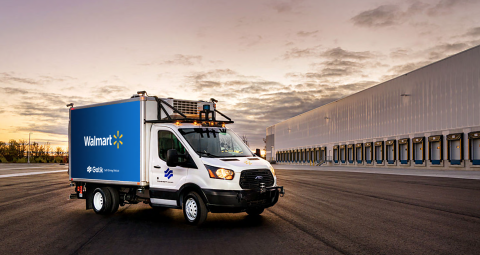 Walmart and Gatik are expanding their autonomous-truck pilot to Louisiana to deliver items from a Supercenter to a Walmart pickup point on a 20-mile route between New Orleans and Metairie.

Building on the autonomous-vehicle pilot that it launched last year with Palo Alto, California-based Gatik to move customer orders on a 2-mile route between a dark store and a Neighborhood Market in its hometown of Bentonville, Arkansas, Walmart revealed that Gatik’s multi-temperature Autonomous Box Trucks will go fully driverless on this route, after traveling more than 70,000 operational miles in autonomous mode with a safety driver, as well as expand to neighboring Louisiana.

On the subject of the fully driverless route, Tom Ward, SVP of customer product, Walmart U.S., wrote in a blog post, “This achievement marks a new milestone that signifies the first-ever driverless operation carried out on the supply chain middle mile for both Gatik and Walmart.”

Added Ward: “When we begin incorporating driverless Box Trucks into the Bentonville operation next year, the pilot will continue as it always has. But now, we’ll be working with Gatik to monitor and gather new data to help us stay on the leading edge of driverless autonomous vehicles.”

Beyond going driverless, the retailer and Gatik are expanding the pilot to Louisiana “to test an even longer delivery route and a second use case — delivering items from a Supercenter to a Walmart pickup point, a designated location where customers can conveniently pick up their orders,” noted Ward, adding that the pilot in Louisiana will initially use a safety driver.

The Louisiana operation will launch in early 2021 on a 20-mile route between New Orleans and Metairie, enabling customers who live further away from the New Orleans store to take advantage of the pickup service.

“With 90% of Americans living within 10 miles of a Walmart, a closer store isn’t always the answer,” observed Ward. “Perhaps it’s just a pickup location, with an autonomous vehicle making deliveries on a constant loop. Our trials with Gatik are just two of many use cases we’re testing with autonomous vehicles, and we’re excited to continue learning how we might incorporate them in a delivery ecosystem.”

The company is also working on pilots with self-driving vehicle providers Cruise and Nuro. Other retailers currently experimenting with autonomous vehicles include The Kroger Co. (with Nuro) and Save Mart (with Starship Technologies).

Walmart operates more than 11,300 stores under 56 banners in 27 countries, and e-commerce websites, employing 2.2 million-plus associates worldwide. Walmart U.S. is No. 1 on The PG 100, Progressive Grocer’s list of the top food and consumables retailers in North America, while Walmart-owned Sam's Club ranks No. 9, Cincinnati-based Kroger is No. 3, and Modesto, California-based Save Mart is No. 49 on PG's list.