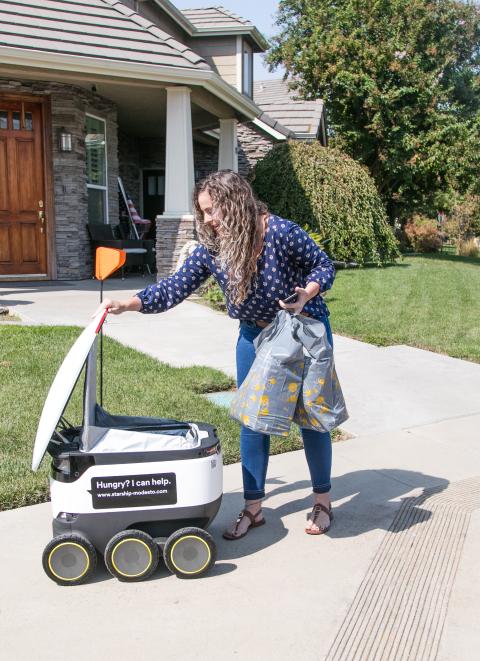 A Starship Technologies robot makes a delivery from a Save Mart store in California.

Everyone knew that the food retailing industry was headed to a place of increased digital convergence at the beginning of 2020. There were extensive studies of consumers, reports were written and projections were made about the impact of technology and how food retailing was going to catch up to other retail sectors with much higher rates of digital adoption.

Then the pandemic hit, and as 2020 draws to a close, food retailers find themselves in a place where most didn’t expect to be for at least another five years, if not more. Changes in shopper behavior and retail operations happened at blinding speed, with the pandemic serving as an accelerant for digital innovation and technology transformation. Now, as 2021 begins, retailers are challenged on two fronts: They must continue to digest the vast amount of change and new shopper behaviors heaped on their organizations in 2020 while embracing new technology developments that continue to present themselves at an accelerating pace.

One of the ways that the transformative effects of technology manifested themselves in 2020 was that the differences between the technology haves and have-nots were amplified. That wasn’t an entirely surprising development, though, as during prior periods of technological advancement, early adopters gained the upper hand. Decades ago, when point-of-sale scanning technology emerged, those with the budgets and foresight were rewarded with greater visibility into product sales and category trends.

The big difference between then and now as the retail industry hurtles into 2021 is that the technology playing field has, in many respects, been leveled. Technologies once available only to tier-one retailers with big budgets, large IT teams and in-house development capabilities are now accessible to independent retailers and single-store operators, thanks to a wide array of solution providers.

Every aspect of food retail is poised to undergo some degree of optimization, enhancement and transformation in 2021. Enterprising solution providers continue to find new ways to take data, often from disparate sources; unify the information; and then leverage artificial intelligence to extract insights that guide actions. This process plays out in myriad ways.

For example, a Silicon Valley startup called Afresh Technologies is attracting a lot of interest from retailers for a value proposition that involves improving fresh-item order accuracy to grow sales and reduce waste. One of the company’s early investors is James McCann, a veteran food industry executive who was previously CEO of Ahold USA, but now leads Boston-based investment fund, Food Retail Ventures. McCann met the principals of Afresh, who are former college roommates at Stanford, while attending an industry event several years ago.

What Afresh does is leverage artificial intelligence to dramatically improve order accuracy in the fresh department. It sounds simple, but as McCann notes, it’s very hard to do because of the dynamics of perishable and fresh categories, which make products susceptible to waste, and where manual processes are still often used.

“What the Afresh team has built is one of the most transformative technologies that we’ve seen in fresh foods in the last 25 years,” McCann says. “I can’t endorse it any more highly.”

McCann grew so keen on the solution that his VC firm recently increased its investment to the point where Afresh is now Food Retail Ventures’ largest holding, and he has joined Afresh’s board.

This scenario plays out in other areas of food retail, most notably in the e-commerce space, where expectations are high that the rapid adoption of online food shopping will remain a permanent way of life for millions of Americans who either became digital grocery converts or increased their usage of e-commerce shopping options throughout the pandemic.

“Our vision of the future of grocery is to recognize that digital has advantages, and it is no longer about physical or digital, because it really doesn’t matter to shoppers anymore,” says Matthew Walker, director of global sales with Tel Aviv- and Brooklyn, N.Y.-based Stor.ai, a provider of technology solutions that enables retailers to fully integrate their digital and physical operations.

With its origins serving the grocery and consumer goods industry in Israel, a nation known to rival Silicon Valley as an innovation hub, Stor.ai is set to make inroads in the U.S. market in 2021, and recently rebranded as Stor.ai after previously operating under the name Self Point.

“We wanted a brand that represents where we are going as a company leading the drive to a true omnichannel experience,” notes Stor.ai Chairman Mayer Gniwisch, an e-commerce veteran who founded the jewelry websites Ice.com and Diamond.com at the dawn of the digital age.

Other elements of the omnichannel experience, where the distinction between big and small is no longer the advantage it once was, relates to retailers functioning as media platforms. While companies such as Walmart, Kroger, Target and Albertsons offer sophisticated digital targeting capabilities to suppliers, those same capabilities are available to smaller retailers. End-to-end e-commerce solution providers such as Toronto-based Mercatus offer grocers that use its platform the ability to win with e-commerce, but also the opportunity to effectively target shoppers with ads and monetize their site traffic. Mercatus recently partnered with Chicago-based e-commerce advertising solutions provider CitrusAd, a company founded in 2017, to bring new ad display unit capabilities to the Mercatus platform.

“Display media in e-commerce needs to be more targeted and relevant to shoppers; with the average 18-minute online shopping experience, it can no longer look out of place on any browsing or search term page,” says Sylvain Perrier, president and CEO of Mercatus.

Consumers’ demand for digital grocery, and the profitability challenges it presents for retailers and their third-party providers that pick orders, has led to a focus on autonomy. Whether that’s picking orders in large robotic fulfillment centers, the model on which Kroger has placed a multibillion-dollar bet, or smaller micro-fulfillment centers adjacent to stores, 2021 will bring greater clarity to whatever the optimal approach turns out to be.

The first of Kroger’s automated fulfillment centers, developed in partnership with U.K. digital grocer Ocado, are set to open in central Florida and near Kroger’s Cincinnati headquarters in 2021. Meanwhile, numerous other retailers are experimenting with micro-fulfillment centers adjacent to stores, where high-velocity items, or those products which lend themselves to rapidly advancing robotic picking systems, can be accommodated.

While 2020 was a pivotal year for e-grocery automation, Derek Sorensen, a senior consultant with Swisslog Logistics Automation, Americas, is keeping a close eye on robotic picking.

“With many grocers still in the process of implementing their first automation projects, it may seem a little premature to be thinking about emerging technologies such as robotic item picking, but this technology is already being piloted in other industries,” Sorensen observes. “As it gains traction in 2021, grocers may rightly wonder whether it should be considered as a second phase of their automation plans.”

The good news, according to Sorensen, is that robotic vision and gripping technologies have advanced considerably in recent years, with today’s systems capable of picking a high percentage of the products in a typical e-grocery order. It’s important for retailers to develop pilot programs designed to identify exceptions that robots may encounter when picking orders and to define business rules for handling them.

“There is also the opportunity to use robotic item pickers to supplement human pickers,” he adds. “They could, for example, be deployed to work overnight to pull all of the packaged goods for the day’s orders. Human pickers could then focus on topping off orders with produce and other harder-to-pick items.” 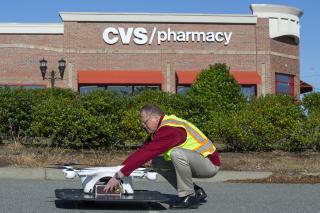 CVS and UPS are working together on drone deliveries involving small packages.

Product delivery remains a thorny challenge for food retailers, and one where autonomy is often seen as the solution, with many intriguing pilots underway and more expected in 2021. In September, Save Mart launched an on-demand grocery delivery service from its flagship store in its hometown of Modesto, Calif., using a fleet of tiny vehicles that can operate on sidewalks provided by San Francisco-based Starship Technologies. The vehicles can transport up to 20 pounds of goods and travel 4 miles round-trip, so the range isn’t great, but the concept is proven, with Starship boasting more than 500,000 deliveries throughout its network.

Once an order is submitted, Save Mart team members gather delivery items to place in the vehicle which then travels at pedestrian speed. Shoppers can watch, via an interactive map, as the robot makes its journey from the store to them. Once the robot arrives, shoppers receive an alert, and then meet and unlock the vehicle through the app.

Other retailers are experimenting with larger vehicles. Bentonville, Ark.-based Walmart will soon begin a test in the Scottsdale, Ariz., market with Cruise to deliver products with the San Francisco-based company’s electric vehicles.

“What’s unique about Cruise is they’re the only self-driving car company to operate an entire fleet of all-electric vehicles powered with 100% renewable energy, which supports our road to zero emissions by 2040,” notes Tom Ward, SVP of customer product, Walmart U.S.

As if ongoing experiments from Walmart and Kroger weren’t enough validation that autonomous deliveries will be a thing in the future, investors are also pouring large sums into the space. Self-driving vehicle maker Nuro, based in Mountain View, Calif., recently raised $500 million in a Series C funding round to support further development of its second-generation lightweight delivery vehicle, which the company notes received the first and only federal exemption for an autonomous vehicle from the U.S. Department of Transportation (DOT) and the National Highway Traffic Safety Administration.

“We now know that our industry, self-driving local delivery, will not only make it easier to buy groceries, hot food, prescription drugs and other products, but will also positively impact local economies and serve low-income communities living in food deserts,” company co-founder Jiajun Zhu said when the funding was secured in November.

Meanwhile, other providers are focused on bringing the store to the neighborhood. A Toronto-based company called Grocery Neighbour has ambitious plans to operate mobile grocery stores in purpose-built 53-foot trailers that contain a curated assortment of essentials such as produce, meat, bread, vegetables, frozen products, dairy and nonperishables. Company founder Frank Sinopoli aims to have 1,000 vehicles in operation in five years that operate on set routes and become neighborhood fixtures over time.

The pandemic, and food retailers’ response to it, tended to overshadow the fact that when it comes to autonomy, there continues to be a lot of buzz about drone technologies. Of particular note, in October, the DOT program known as the Unmanned Aircraft Systems (UAS) Integration Pilot Program (IPP) came to an end after three years. However, to continue work on integrating drones into national airspace, DOT created a new program called BEYOND, a key element of which involves resolving line-of-sight operational challenges, with an emphasis on small-package delivery.

“The IPP propelled the American drone industry forward, allowing for unprecedented expansions in testing and operations through innovative private-public partnerships across the country,” says U.S. CTO Michael Kratsios. “Now, the BEYOND program will build upon this success, tackling the next big challenges facing drone integration.”

The long-term potential for drones is real enough that it warranted mention among the risk factors cited by delivery services provider DoorDash when the San Francisco-based company filed for an initial public-stock offering in November.

The same could be said of many things when it comes to technology, as the outcomes of new developments are never guaranteed. However, what is guaranteed is that technology, in all of its various forms, will have an even greater impact on food retailing in 2021.