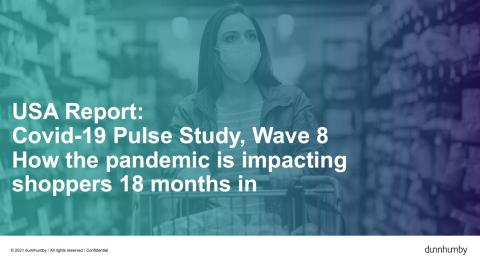 According to dunnhumby's research, consumers’ concerns with grocery stores include the sense that things aren’t returning to normal, the presence of unvaccinated shoppers in stores, and fears about the virus itself.

Consumers’ concerns with grocery stores include the sense that things aren’t returning to normal (76%), the presence of unvaccinated shoppers in stores (34%) and fears about the virus itself (26%). While 21% said there was no store that provides good value for the money, Walmart continued to be the top pick for providing the best value (29%), followed by Aldi (12%), Kroger (7%) and Target (6%). Amazon dropped out of the top five stores for value, chosen by just 4% of respondents.

“After living with the pandemic for 20 months, consumers are now twice as concerned about their personal finances as they are about COVID itself,” said Grant Steadman, president for North America at Chicago-based dunnhumby.  “With inflation persisting, and government stimuluses phased out, the majority of shoppers are now looking for greater value. Retailers who are perceived as offering more value, and respond to their customers’ increasing need for this, will earn the loyalty of the new customers they gained during the early phases of the pandemic.”

Among the key findings of the study:

The dunnhumby Customer Data Science Platform offers a unique mix of technology, software and consulting, with the aim of enabling businesses to increase revenue and profits by delivering exceptional experiences for their customers in-store, offline and online. dunnhumby employs almost 2,500 experts in offices across Europe, Asia, Africa, and the Americas, working for such brands as Tesco, Coca-Cola, Meijer, Procter & Gamble, and Metro.

Bentonville, Ark.-based Walmart operates more than 10,500 stores under 48 banners in 24 countries, and e-commerce websites, employing 2.2 million-plus associates worldwide. Walmart U.S. is No. 1 on The PG 100, Progressive Grocer’s 2021 list of the top food and consumables retailers in North America. Seattle-based Amazon is No. 2 on the list, while its wholly owned subsidiary, Austin, Texas-based Whole Foods is No. 26. Meanwhile, Cincinnati-based Kroger is No. 3, Minneapolis-based Target is No. 6 and Batavia, Ill.-based Aldi U.S. is No. 24 on PG’s list.