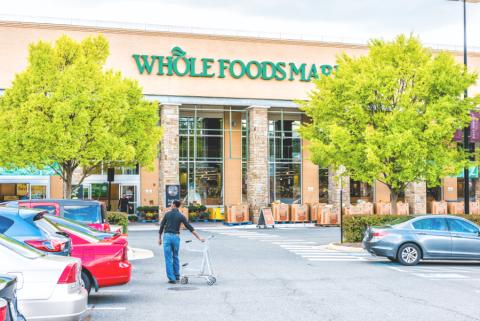 Members of Amazon’s Prime subscription program, which offers free unlimited two-day delivery, unlimited music and video streaming, among other perks, can now shop Whole Foods for fresh and organic produce, baked goods, dairy products, meat, seafood, floral products, and everyday staples. The ecommerce orders will be ready for pickup in as little as an hour for orders of $35 or more – or as quickly as 30 minutes for a $4.99 fee – all without leaving the car.

To use the service, Prime members place orders via the Prime Now app and choose the “pickup” option at checkout. After selecting either free or charged pickup, customers drive to the store, park in a designated spot, and receive the order from a Prime Now shopper, who places the order in the car within minutes. Customers in transit who communicate that they're on their way via the Prime Now app will have their groceries ready upon arrival.

“A customer can order at 5:00 p.m., pick up at 5:30 p.m., and we’ll have their groceries loaded into their car just minutes after arrival,” said Stephenie Landry, worldwide VP of Prime Now, Amazon Fresh and Amazon Restaurants. “For an even faster experience, customers can tell us they are on their way using the Prime Now app, and groceries will be ready as they arrive.”

Amazon launched grocery delivery for Prime members via Whole Foods stores in February, just prior to the merger of its Amazon Fresh and Prime Now programs, which likely united to better streamline the ecommerce company's grocery technology. The service has since expanded to several major cities: Atlanta, San Francisco,Los Angeles,Chicago, Minneapolis, Houston, and, most recently, New York, helping the ecommerce giant earn its name as a major player among online grocers.

While Amazon, through Whole Foods, made its big entry into the grocery market less than a year ago, it’s already making its mark: The company’s grocery sales grew by nearly 50 percent in the first quarter of 2018, and consumers are starting to see it like any other grocery store, according to a new report from One Click Retail.