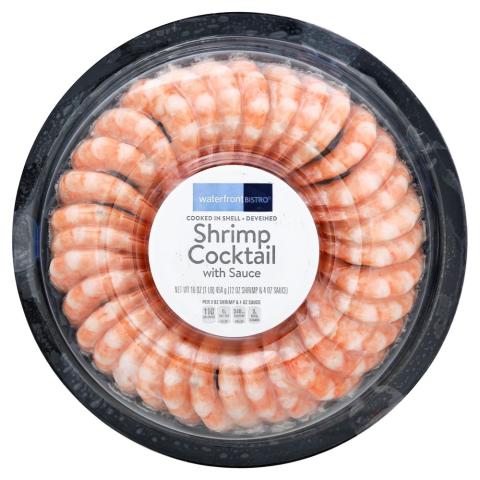 Albertsons Cos. is removing certain frozen Waterfront Bistro shrimp products from its banners due to potential Salmonella contamination. The removal follows  the recall made by Asian supplier Avanti Frozen Foods Pvt. Ltd.

The 16-ounce Waterfront Bistro shrimp cocktail ring with sauce was  available in California, New Mexico and Texas from the following store banners: Albertsons, Vons, Pavilions, United, Amigos, Market Street and Albertsons Market. Customers may have purchased the shrimp in stores, or  online for Drive Up & Go or grocery delivery, beginning in January 2021.

Avanti's official recall announcement can be found here.Other retail partners of Avanti that are affected in the recall include Whole Foods Market, Hannaford Supermarkets and Meijer. Avanti issued its recall after the FDA identified Salmonella during prior testing of Avanti’s imported shrimp. The company didn't distribute that prior shipment, which was destroyed. Subsequent voluntary recalls are being made out of an abundance of caution.

There haven’t been any reports yet of illness associated with Albertsons' Waterfront Bistro shrimp cocktail rings. However, there have been six reports of Salmonella-related illness to date associated with Avanti’s other distribution partners.

Salmonella is an organism that can cause serious and sometimes fatal infections in young children, frail or elderly people, and others with weakened immune systems. Healthy people infected with Salmonella often experience fever, diarrhea, nausea, vomiting and abdominal pain.

Customers who purchased the affected shrimp products are asked to discard or return them to the place of purchase for a refund.

In other seafood news, a few weeks ago, Albertsons revealed that it had met its goal of responsibly sourced sushi 18 months ahead of schedule. The food retailer said that 100% of its stores’ prepared sushi is now aligned with the company’s Responsible Seafood Policy, which provides sustainable and traceable seafood from environmentally and socially responsible sources.