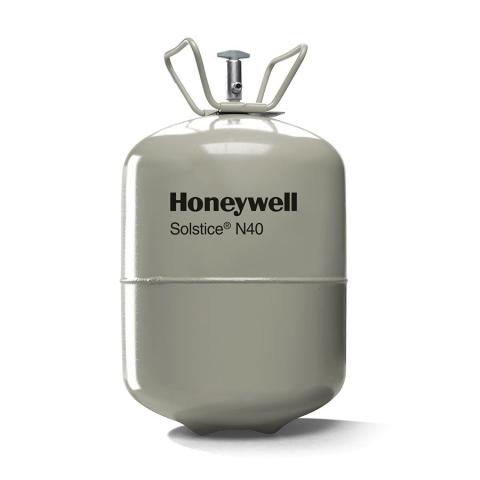 Honeywell's Solstice N40 is the most widely accepted, lowest-GWP, nonflammable refrigerant replacement for R22 and R-404A globally, according to the company.

Albertsons/Safeway, Whole Foods Market, convenience store chain 7-Eleven and a Carrefour operator are among the honorees of the inaugural Solstice Awards program, designed by Honeywell to recognize companies around the world that are visibly demonstrating their commitment to sustainable air conditioning and refrigeration by adopting refrigerants based on the company’s proprietary Solstice technology to maximize efficiency and reduce their carbon footprint.

“With World Refrigeration Day and the summer solstice occurring in the same week, it seemed fitting to honor the recipients of our first Solstice Awards,” noted Ken West, VP and general manager, Honeywell Fluorine Products. “We are proud to play an integral role in helping so many companies around the world achieve their sustainability goals.”

World Refrigeration Day is an annual observance held on June 26.

Albertsons/Safeway adopted Solstice N40 (R-448A) lower global-warming-potential refrigerant in more than 640 stores. Solstice N40 is the most widely accepted, lowest-GWP, nonflammable refrigerant replacement for R22 and R-404A globally, according to Honeywell. “At Albertsons/Safeway, we are committed to responsible refrigeration practices that lead to a healthier planet,” said Wade Krieger, refrigeration and HVAC manager, at the grocer. “The lower GWP of Solstice N40 supports our environmental commitments while also improving overall energy performance and meeting our budget requirements.”

Whole Foods deployed Solstice N40 in more than 100 of its U.S. stores as it sought to reduce refrigerant emissions under the U.S. Environmental Protection Agency’s GreenChill program. “In the past decade, we’ve implemented several innovative measures to reduce our CO2 emissions, and the use of Honeywell’s refrigerant to retrofit our stores will contribute significantly to this goal,” explained Mike Ellinger, Whole Foods’ principal program manager-engineering, compliance and sustainability. “After reviewing all of our available retrofit options for our refrigerated cases, Solstice N40 was the clear winner, based on its performance, energy efficiency, reduced GWP and ease of conversion.”

7-Eleven standardized its refrigerated cases in the United States, Canada and Japan with Solstice N40 to further its sustainability goals. “In an effort to reduce our carbon footprint, we’ve introduced several innovative measures such as LED lighting, energy management systems, wind energy in select stores and high-efficiency HVAC units,” observed Ann Scott, 7-Eleven’s senior director of energy, engineering and store planning. “The use of Solstice N40 is an environmentally preferable alternative for 7-Eleven. Joining forces with Honeywell, which also embraces a mindset and goal to serve as environmental stewards, was a natural fit.”

The other Solstice winners were Danfoss and Trane Technologies.

Morris Plains, N.J.-based Honeywell is a developer, manufacturer and supplier of refrigerants sold worldwide under the Solstice and Genetron brands for a range of applications, including refrigeration and building and automobile air conditioning. According to the company, worldwide adoption of Solstice products has led to the reduction of more than 210 million metric tons of CO2 to date, equal to eliminating the emissions from more than 44 million cars from the road for a year. Honeywell recently committed to achieve carbon neutrality in its operations and facilities by 2035.

Boise, Idaho-based Albertsons operates 2,277 retail stores with 1,725 pharmacies, 400 associated fuel centers, 22 dedicated distribution centers and 20 manufacturing facilities. The company’s stores predominantly operate under the Albertsons, Safeway, Vons, Pavilions, Randalls, Tom Thumb, Carrs, Jewel-Osco, Acme, Shaw’s, Star Market, United Supermarkets, Kings Food Markets and Haggen banners. Albertsons is No. 8 on The PG 100, Progressive Grocer’s 2021 list of the top food and consumables retailers in North America. Dallas-based 7-Eleven’s U.S. operation is No. 25 in the ranking. The first national certified-organic grocer, Austin, Texas-based Whole Foods has more than 500 stores in the United States, Canada and the United Kingdom, and is No. 26 on The PG 100, while its parent company, Seattle-based Amazon, is No. 2.