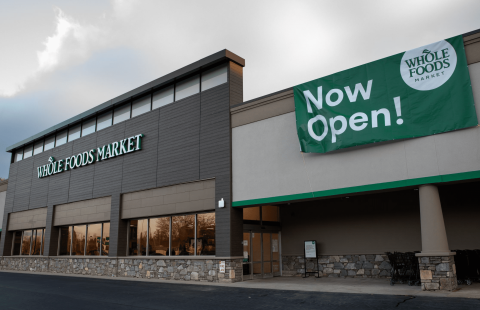 Whole Foods is retrofitting 100 of its more than 500 stores with an environmentally friendly refrigerant that also reduces energy usage.

Whole Foods Market expects a refrigerant from Honeywell to have a significant impact on its efforts to reduce CO2 emissions.

The grocer said that it was beginning the retrofit process at 100 of its stores to begin using an R-448A from Honeywell that's branded as Solstice N40. The new refrigerant, introduced in 2015, replaces R-404A and R22 refrigerants, which are less energy efficient and less environmentally friendly.

"In the past decade, we've implemented several innovative measures to reduce our CO2 emissions, and the use of Honeywell's refrigerant to retrofit our stores will contribute significantly to this goal," said Mike Ellinger, principal program manager-engineering, compliance and sustainability at Austin, Texas-based Whole Foods. "After reviewing all of our available retrofit options for our refrigerated cases, R-448A was the clear winner, based on its performance, energy efficiency, reduced GWP [global warming potential] and ease of conversion.”

Solstice N40 is the most widely accepted, lowest-GWP, nonflammable replacement for R-404A, with more than 30,000 installations globally, according to Honeywell. The reduced-GWP refrigerant is based on hydrofluoroolefin (HFO) technology and is about 68% lower than traditional hydrofluorocarbon (HFC) refrigerants like R-404A and R-22, according to Charlotte, North Carolina-based Honeywell. In addition, refrigeration systems that use this GWP refrigerant have been shown in European supermarket trials to consume 5% to 15% less energy.

"Solstice N40 has become the trusted choice for both commercial and industrial refrigeration customers globally to meet sustainability goals, and we are proud to assist the industry in moving toward the future with environmentally preferable and energy-efficient refrigerants," said Chris LaPietra, VP, Honeywell Stationary Refrigerants. "Solstice N40 will help Whole Foods Market lower its carbon footprint, save energy and meet regulatory requirements without having to undertake massive changes to its systems."

According to Honeywell, worldwide adoption of its Solstice brand products has resulted in the reduction of more than 200 million metric tons of CO2 to date, equal to eliminating the emissions from more than 42 million cars.

Honeywell recently committed to achieve carbon neutrality in its operations and facilities by 2035. This commitment builds on the company's track record of sharply reducing the greenhouse-gas intensity of its operations and facilities as well as its decades-long history of innovation to help its customers meet their environmental and social goals. About half of Honeywell's new product introduction research and development investment is directed toward products that improve environmental and social outcomes for customers.

The first national certified-organic grocer, Whole Foods has more than 500 stores in the United States, Canada and the United Kingdom. The grocer is No. 24 on The PG 100 list, Progressive Grocer’s 2020 list of the top food and consumables retailers in North America, while Seattle-based Amazon is No. 2 on PG’s list.