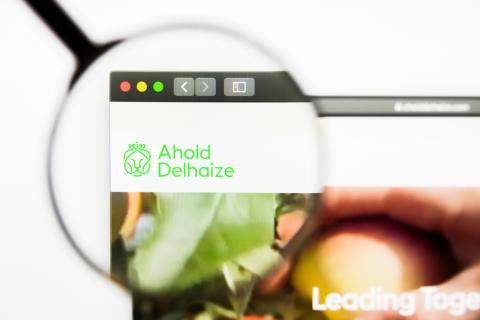 A year-long review by Ahold Delhaize revealed that the main drivers of scope 3 emission reduction can be divided into three categories: suppliers and farmers, low-carbon products, and customer engagement.

Ahold Delhaize has revised its interim CO2 emissions reduction target for its entire value chain (scope 3) to at least 37% by 2030, with the aim of becoming net-zero by 2050. For its own operations (scope 1 and 2), the retail conglomerate remains committed to achieving net-zero status by 2040, with an interim target of a 50% reduction by 2030. Through this updated scope 3 interim target, Ahold Delhaize intends to decarbonize its entire value chain and ensure that all of its climate targets are in accordance with the United Nations’ goal of keeping global warming below 1.5°C.

This updated interim target is in alignment with the Science Based Targets initiative’s (SBTi) Net-Zero Standard. In accordance with the recommendation by the initiative, Ahold Delhaize is using its latest available emission profile from 2020 as the baseline for its 37% 2030 reduction target, updated from an earlier 2018 baseline. In November 2021, Ahold Delhaize joined the Business Ambition for 1.5°C, a global coalition of UN agencies, business and industry leaders, in collaboration with the SBTi and the UN-led campaign Race to Zero. The latest update is part of the annual climate reporting cycle according to the Business Ambition agreements.

While scopes 1 and 2 involve the CO2 emissions of Ahold Delhaize’s own operations, mainly consisting of energy, refrigeration systems, and owned and leased transport, scope 3 represents the indirect CO2 emissions across the entire value chain. This value chain encompasses thousands of suppliers, producers and farmers that supply hundreds of thousands of products sold to millions of customers across the United States and Europe daily.

“As a group of mainstream supermarkets and retailers, we want to provide customers with sustainable and healthy products while keeping shelf availability and affordability top of mind,” noted Jan Ernst de Groot, chief sustainability officer at Ahold Delhaize. “Our commitment is to future generations, to continue to play a leading role in the transition to a more sustainable food system.”

The updated interim target follows an extensive review, which began in November 2021 with the input of external experts. Ahold Delhaize’s review revealed that the main drivers of scope 3 emission reduction can be divided into three categories: suppliers and farmers, low-carbon products, and customer engagement.

A key element of the retailer’s decarbonization efforts is encouraging its suppliers to set their own emission reduction targets in line with the latest scientific evidence, and to take part in the SBTi. These commitments aim to accelerate improvements in livestock farming, raw-material sourcing, deforestation reduction, processing, food waste reduction, packaging and transport. Ahold Delhaize’s brands can contribute by supporting their suppliers and farmers through concrete environmental actions, such as establishing long-term contracts with farmers.

Several of Ahold Delhaize’s brands continue to add plant-based protein products to their offerings, thereby improving existing assortments and creating new assortments with less embedded emissions. For example, the company’s Albert Heijn banner, in the Netherlands, has committed to achieve a distribution of 60% plant-based and 40% animal-based protein sales by 2030. All of Ahold Delhaize’s European brands will commit to baseline their current protein ratio and set protein ratio targets by the end of 2024.

Ahold Delhaize also strives to help its customers understand the impact of their buying decisions and make choices that fit their needs, their tastes and their values. This includes encouraging and rewarding more sustainable choices via loyalty programs and discounts, boosting product transparency through navigation systems and product labeling, offering assortments with more vegan and vegetarian products, and increasing awareness and knowledge about a healthy lifestyle.