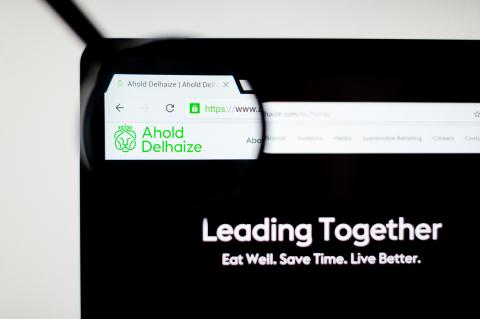 Ahold Delhaize and its brands have committed to long-term targets to attain a net-zero value chain by 2050.

In keeping with its ongoing commitment to sustainability, Ahold Delhaize and its brands have pledged to achieve net-zero carbon emissions across their operations by no later than 2040, and to become net-zero businesses across their entire supply chain, products and services by no later than 2050. Additionally, the retail conglomerate has joined the Business Ambition for 1.5°C, an international coalition of UN agencies, business and industry leaders, in partnership with the Science Based Targets initiative and the UN-led campaign Race to Zero. Ahold Delhaize previously worked toward a net-zero carbon emissions target of 2050.

Having taken a systems approach to developing a climate strategy based on Science Based Targets, the company has conducted in-depth research on the effect of climate change, following recommendations from the Taskforce on Climate Related Financial Disclosure (TCFD).

“As a 150-year-old company, we are committed to do our part and ensure we can keep serving our customers and communities in a responsible way for the next 150 years,” noted Ahold Delhaize CEO Frans Muller. “We believe we are taking the right steps, through stakeholder feedback and third-party recognition like the Dow Jones Sustainability Index, ranking us in the top 10% of companies and from MSCI, recently upgrading Ahold Delhaize from an ‘A’ to an ‘AA’ ESG rating.”

Ahold Delhaize’s current goal is to lower carbon emissions from its brands’ own operations by 50% by 2030, the 2018 baseline. Key considerations are that:

Ahold Delhaize and its brands have committed to long-term targets to attain a net-zero value chain by 2050 and will advocate that its value chain partners create carbon emission reduction plans consistent with a scenario to limit global warming to 1.5°C. The biggest opportunity to reduce carbon emissions is in agriculture: Ahold Delhaize brands are collaborating with farmers, incentivizing sustainable change through longer-term contracts with concrete environmental requirements and co-investments on their farms. A detailed plan will follow within the next 12 months.

“Ahold Delhaize’s local brands work with thousands of farmers and suppliers who create hundreds of thousands of products,” said Daniella Vega, the company’s global SVP health and sustainability. “We consider this a huge responsibility and a huge opportunity. The brands can drive supplier engagement and work with them to protect and restore forests and other ecosystems.”

Ahold Delhaize’s Health and Sustainability strategy is based on the idea that the health crisis and the climate crisis are inextricably linked, and that healthier food choices are, more often than not, better planetary choices. Therefore, a more balanced diet and more sustainable shopping baskets will help reduce carbon emissions, improve soil health, mitigate deforestation and increase biodiversity.

Ahold Delhaize USA, a division of Zaandam, Netherlands-based Ahold Delhaize, operates more than 2,000 stores across 23 states and is No. 10 on The PG 100, Progressive Grocer’s 2021 list of the top food and consumables retailers in the United States.