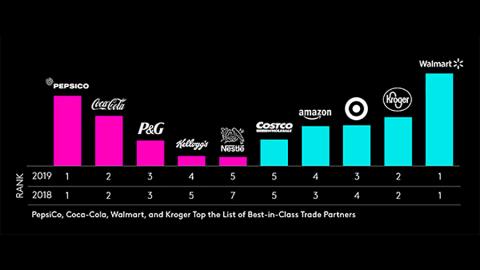 Walmart Inc. kept its top spot among retailers on global consulting firm Kantar’s 2019 U.S. PoweRanking for the 23rd straight year, along with a No. 1 ranking in seven of the report’s nine metrics. On the brand side, PepsiCo earned the top position for the fourth year in a row and was also ranked first in all nine metrics measured by the study for the second consecutive year.

Selected by their trading partners — retailers score brands, while brands score retailers — the ranking spotlights which companies are the most productive partners. Companies are ranked according to a range of factors, from strategic metrics to business fundamentals.

Walmart remained No. 1 because of its clarity of strategy, supply chain, digital resources and manufacturer belief in future performance. The Kroger Co. came in second on the retailer list for the fourth consecutive year, while Target rose to the third position due to significant investment in its omnichannel offering. Amazon and Costco completed the top five, while Dollar General made it into the top 10 this year after ranking 13th last year.

“Walmart’s position at the top of the rankings once again shows its ability to continuously innovate and stay abreast of the latest trends in retail,” noted Patrick Fellin, Kantar’s head of consulting, analytics and shopper solutions. “Walmart embraces change, and as such has effectively managed long-term retail climate change with skill and foresight.”

PepsiCo was recognized in particular for spurring growth and profits through its investments in innovation. Coca-Cola, which earned the No. 2 position on the list for the third year in a row, was recognized for being solutions-driven and expert at forging strong partnerships. General Mills and Nestlé experienced the biggest rises among manufacturers, moving up six and two spaces, respectively.

“Retailers and manufacturers today are dealing with a vastly different landscape from even five years ago,” said Fellin. “Those who recognized and responded to the changing climate were able to capitalize on the balance of power shifting towards the shopper. PoweRanking leaders have leveraged this new reality, building a better, deeper relationship with their customers and seeing overall success as compared to their competitors.”

Bentonville, Ark.-based Walmart operates more than 11,300 stores under 58 banners in 27 countries, and ecommerce websites, employing 2.2 million-plus associates worldwide. The company is No. 1 on Progressive Grocer’s 2019 Super 50 list of the top grocers in the United States.Cincinnati-based Kroger is No. 2 on the list, while Minneapolis-based Target is No. 15, and Seattle-based Amazon, parent company of Whole Foods Market, is No. 10.