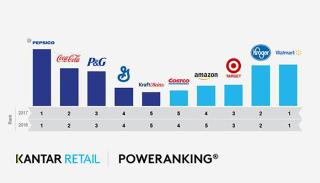 Competition heated up in data, insight and consultancy company Kantar Retail’s 2017 U.S. PoweRanking report on retailers, with Kroger and Walmart finishing in a virtual tie for the top spot, although the Bentonville, Ark.-based mega-retailer managed to hold onto its No. 1 ranking. Amazon, meanwhile, continued its rise through the ranks to claim the fourth position overall.

Rounding out the retailer top five were Minneapolis-based Target Corp., at No. 3, and Issaquah, Wash.-based Costco, which came in fifth.

Although Cincinnati-based Kroger gave it a run for its money, Walmart particularly stood out in the areas of clear strategy and supply chain management. As one manufacturer told Kantar:“Walmart manages their inventory better than anyone. They manage supply and demand with unrivaled precision.”

“Walmart achieved the No. 1 position in the retailer rankings for the 21st year in a row,” Norwalk, Conn.-based Kantar noted in the executive summary of this year’s PoweRanking. “Last year, Walmart was in a virtual tie with Kroger and, albeit with a narrow margin in 2017, Walmart regained the lead over Kroger. Walmart continues to prepare itself for the future by staying true to its ‘low-price strategy’ for Walmart stores, while looking for new sources of growth through acquisition of online and B&M [brick-and-mortar] retailers. In 2016, Walmart acquired Jet.com and in 2017 continued growth through acquisition of five other retail brands including: Bonobos, Modcloth.com, Shobuy.com, Hayneedle.com and Moosejaw. The Courageous Action is staying true to parts of the core culture, but through both acquisition and internal change getting over 2 million employees to think about Walmart as an omnichannel, rather than a store-based retailer.”

Of Seattle-based Amazon, Kantar observed that “no company made a more courageous bet on a different future in 2017 than Amazon’s expanding into brick-and-mortar grocery retail. Jeff Bezos often talks about courageous growth — mostly in terms of his company’s ability to take risks and tolerate failure versus his competitors that are more culturally and financially constrained. Amazon will continue to make very courageous bets on growth in the future, challenging the rest of the industry to respond. The Courageous Action is showing the trade how B&M and ecommerce can work synergistically.”

In the supplier rankings, PepsiCo edged out Atlanta-based Coca-Cola for first position. Demonstrating broad improvement across many of the strategic and operational metrics measured in the study, Purchase, N.Y.-based PepsiCo earned particular praise for providing top-class capabilities in the area of insights. As one major retailer observed: “Pepsi always brings customized ideas to retailers for mutual growth, and has the resources and dedication to then test and adjust the plans,” while other retail partners described the company as “creative, willing to listen to the customer and [flexible] to work with each of our platforms differently."

“Given the state of continuous chaos, many retailers and manufacturers have shifted their attention to delivering financial goals and focusing on the bottom line,” said Kantar Retail Chief Client Officer Daniel Raynak. “The 2017 results reflect the continued rise of courageous-growth leaders that prioritize innovation and insights over margin management.”

Kantar’s annual PoweRanking enables industry executives and analysts to identify best-in-class manufacturers and retailers. Selected by their peers, the companies are ranked on everything from strategic metrics to business fundamentals, uncovering collaboration and growth opportunities.

The full report can be purchased by contacting Raynak at [email protected].