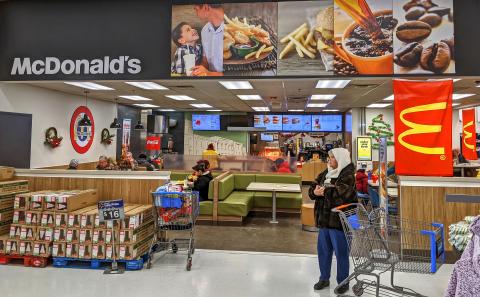 McDonald’s is preparing once more to close restaurants in hundreds of Walmart stores across the country, according to a published report in The Wall Street Journal noting that the three-decade “mutually beneficial relationship” between the two mega-businesses has frayed as shoppers transitioned to online shopping; fast-food units began relying more on drive-through windows — which the Walmart locations don’t have — and indoor dining was discouraged or even prohibited during the pandemic.

Citing the fast-food behemoth, WSJ reported that approximately 150 McDonald’s stores will remain at U.S. Walmart locations after this latest round of closures, which should be complete by this summer. At the height of the partnership, there were about 1,000 McDonald’s restaurants within Walmart stores.

Franchisees of Milford, Connecticut-based sandwich chain Subway are also closing locations inside Walmarts, pointing to diminished foot traffic and lower profits. Subway franchisee Jim Miller told WSJ that since a greater number of Walmart customers are picking up their items in store parking lots during the pandemic and not coming inside to eat, “[t]he Walmart locations have been our toughest challenge.” Miller plans to close four of his five Walmart restaurants in Michigan, Ohio and Indiana by June.

Walmart has long depended on revenue from restaurants leasing space inside its stores, while Costco Wholesale Corp. runs its own restaurant space and Target Corp. operates its own foodservice space under licensing agreements with such partners as Starbucks Corp. As a result, Walmart is seeking new models for its store restaurants, turning to meals to-go, delivery and partnerships with small regional chains. The company is currently testing new locations with Taco Bell and expanding Domino’s Pizza locations, Linne Fulcher, Walmart’s VP of customer strategy, told WSJ. There are now around 30 Domino’s restaurants within Walmart stores.

Walmart and Chicago-based McDonald’s have been partners since the mid-1990s, and at one time the retailer permitted the fast-food icon to be the only restaurant when it established an in-store location. In recent times, however, the two companies have had difficulty finding a mutually workable model at many locations, people familiar with the situation told WSJ. McDonald’s locations inside Walmart stores are generally less profitable than stand-alone restaurants, partly because of the lack of drive-through windows, the main driver of McDonald’s sales.

There were about 500 McDonald’s locations in Walmart stores at the beginning of last year, down from more than 800 in 2012, according to the restaurant chain, which has held two rounds of closures in the past year, including this past summer. The closures were actually in the works even before COVID-19 hit, but McDonald’s ramped them up during the pandemic.

Bentonville, Arkansas-based Walmart operates more than 11,400 stores under 55 banners in 26 countries, and e-commerce websites, employing 2.2 million-plus associates worldwide. Walmart U.S. is No. 1 on The PG 100, Progressive Grocer’s list of the top food and consumables retailers in North America, while Walmart-owned Sam's Club ranks No. 9 on the list.