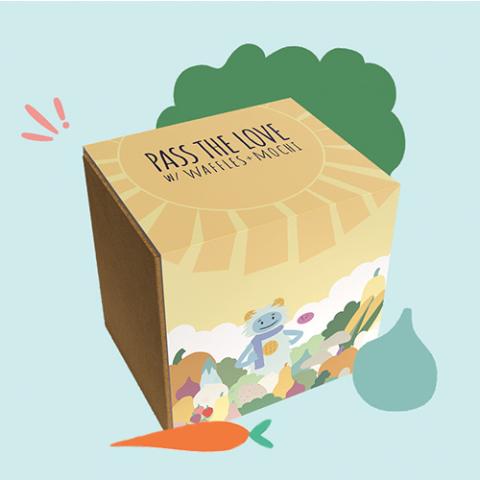 Socially conscious foodservice organization Genuine Foods has sourced and assembled the Partnership for a Healthier America's meal kits including ingredients and recipes inspired by “Waffles + Mochi.”

The Partnership for a Healthier America (PHA), together with PHA Honorary Chair Michelle Obama and Higher Ground Productions, is bringing the Pass the Love w/ “Waffles + Mochi” campaign to Atlanta and Cleveland, Ohio. Beginning next month, families in both cities will receive Pass the Love meal kits, with recipes and ingredients inspired by the popular new Netflix series “Waffles + Mochi.” Altogether, PHA and its partners will distribute more than 400,000 meals combined in Atlanta and Cleveland.

“It’s no secret that the pandemic has been far tougher on some Americans than others, especially when it comes to health and hunger. So it couldn’t be more clear that addressing these widening gaps in America means addressing the inequities that persist when it comes to affordable, nutritious food,” said former First Lady Michelle Obama. “Together with PHA, we’re bringing healthy meal kits to economically disadvantaged communities, and I’m so proud that we’ve now taken such a meaningful step toward our goal of distributing 1 million meals to families in need.”

With aid from inaugural partners Walmart and New York-based meal kit company Blue Apron, PHA is raising awareness of food equity issues. Additional funding has been provided by Bounty and individual donors across the country. Pass the Love meal kits will be given out free, thanks to financial support from partners and donors.

In Atlanta, Cleveland and future cities yet to be revealed, Pass the Love meal kit distributions will occur over four weeks and build the capacity of local nonprofits in those cities, based in part on PHA’s COVID-19 Fresh Food Fund. In Atlanta, PHA is collaborating with the Atlanta Community Food Bank to manage local distributions, and in Cleveland is teaming with the Cleveland Metropolitan School District, with distributions starting next month. Washington, D.C.-based socially conscious foodservice organization Genuine Foods has sourced and assembled the meal kits, which include ingredients and recipes inspired by “Waffles + Mochi,” to enable families to create fun, fast and affordable meals.

Pass the Love w/ “Waffles + Mochi” makes use the show, its characters and Mrs. Obama to meaningfully shift food culture toward more affordable, fun, at-home meals for families of every income level. Through the meal kit distribution program, PHA aims to help communities with the highest levels of childhood poverty, as identified by the Baltimore-based Annie E. Casey Foundation. Future communities will be revealed in the next few months.

Bentonville, Arkansas-based Walmart operates approximately 10,500 stores under 48 banners in 24 countries, and e-commerce websites, employing 2.3 million-plus associates worldwide. Walmart U.S. is No. 1 on The PG100, Progressive Grocer’s list of the top food and consumables retailers in North America, while Walmart-owned Sam’s Club ranks No. 9 on the list.