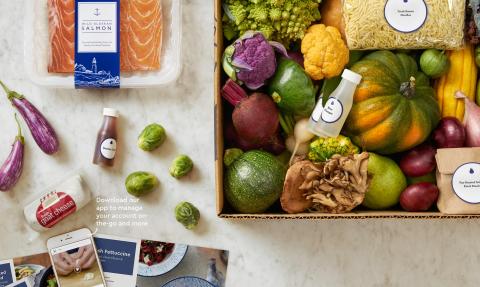 Since late March 2020, Blue Apron has experienced increased demand for its meal kits reflecting, in part, changes to consumer behavior in response to the COVID-19 pandemic.

The pandemic is still being good to Blue Apron, although less so than in the early days of the COVID-19 crisis.

Blue Apron said net revenue for the fourth quarter ended Dec. 31 increased 22% year over year to $115.5 million driven, in part, by the continued execution of the company’s growth strategy, including product innovation.

Since late March 2020, Blue Apron has experienced increased demand for its meal kits reflecting, in part, changes to consumer behavior in response to the COVID-19 pandemic.

Blue Apron's key customer metrics’ year-over-year growth continued in the fourth quarter as Average Order Value grew 6% to over $61, the highest reported level since prior to 2015; Orders per Customer rose 15% year over year to 5.3; and Average Revenue per Customer increased 22% to $327. But the company lost customers for the second straight quarter. The company blamed customer deceleration on marketing cutbacks since the start of the pandemic.

The company during the fourth quarter also strengthened its executive team with the appointments of Randy Greben as CFO and Charlean Gmunder as COO.

“Fourth quarter operating results exceeded guidance as we grew net revenue year over year by 22% to $115.5 million. The fourth quarter marks the third consecutive quarter of double-digit year over year increase in net revenue and highlights our continued operating momentum,” said Linda Findley Kozlowski, Blue Apron’s president and CEO. “Product innovation remains central to our strategy and initiatives to drive customer attraction and engagement. We introduced more new products in 2020 than in any prior year, including the recent launch of our new recipe customization and additional ways for our customers to get more meals from us each week. Both product introductions were well received by our customers and contributed to growth in key customer metrics such as Orders per Customer and Average Order Value, as well as Average Revenue per Customer, which exceeded $300 for the third consecutive quarter. We continue to support our brand and entire range of offerings with more efficient marketing, which is helping us see faster payback periods on customer acquisition.”

The company projects its revenues will rise about 25% year over year for the first three months of 2021, though still with a net loss.

Blue Apron says it will continue to focus in 2021 on increasing capacity at its fulfillment centers, including hiring new employees, increasing wages for front-line workers, and temporarily reducing menu options, which limits the need to change production lines and allows for more time to pack meal kits.