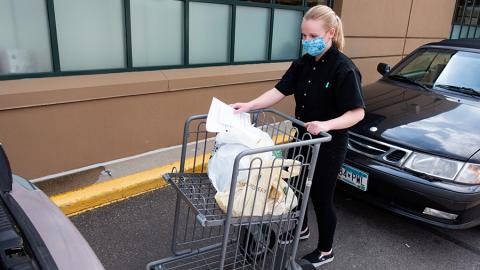 Grocery store employees have continued to work through the pandemic, inspiring many retailers to institute hazard pay, although Kroger and Albertsons have since phased out their bonus programs.

The United Food and Commercial Workers International Union (UFCW), which represents 1.3 million workers in grocery stores and other businesses, has called on major supermarket chains such as The Kroger Co. to reinstate hazard pay following news reports that cases of the coronavirus are at record highs in at least 10 states.

“Across the country, America’s food retailers have ended hazard pay even as COVID-19 health risks have increased for grocery workers on the frontlines of the pandemic,” noted UFCW International President Marc Perrone. “Even worse, multibillion-dollar companies like Kroger are raking in record sales just weeks after cutting hazard pay for the very grocery workers who made that success possible.”

Added Perrone: “The decision by these companies to end COVID-19 hazard pay, despite the ongoing danger, ignores the simple fact that these essential workers are still on the frontlines of a growing pandemic. As the nation’s largest grocery chain, Kroger should be a leader in the industry instead of ignoring the serious health and economic effects faced by these brave workers.”

Kroger posted asame-storesales rise of 19% and a profit increase of 57% in its latest quarterly results, with the grocer’s total sales hitting $41 billion. The company was also among the many retailers, including Albertsons, Amazon, BJ’s Wholesale Club, Dollar General, Target, Stater Bros., Stop & Shop, and Walmart, to institute bonuses for frontline workers.

More recently, however, Kroger and Albertsons have phased out their respective bonus programs, while Target has made good on a three-year-old promise to raise its minimum wage to $15 an hour.

Last month, the UFCW sent a letter to top U.S. grocery CEOs, urging them to provide higher pay and necessary protections for grocery workers. At least 100 grocery workers have died of the coronavirus as of late May, according to The Washington Post. Meanwhile, the union's internal estimates, shared on June 10, have put the number of dead at 225, with more than 29,000 having been sick or exposed to the virus.

Based in Washington, D.C., the UFCW is the largest-private sector union in the United States, representing 1.3 million workers in the health care, grocery, meatpacking, food processing, retail shops and other industries, across all 50 states, Canada and Puerto Rico.

Cincinnati-basedKrogeremploys nearly half a million associates who serve 9 million-plus customers daily through a seamless digital shopping experience and 2,757 retail food stores under a variety of banner names. The company is No. 3 on The PG 100, Progressive Grocer’s 2020 list of the top food retailers in North America.