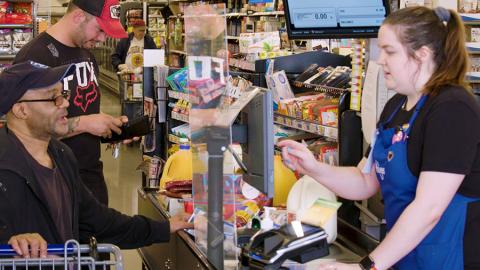 The Kroger Co. plans to add some extra numbers to the bank accounts of its grocery workers, saying Friday that will it award $130 million in “Thank You Pay” to much of its labor force as it continues to toil during the pandemic.

The one-time bonuses will amount to $400 for qualified full-time workers and $200 for qualified part-time associates. Kroger will distribute that Thank You Pay in two installments on May 30 and June 18.

"Our associates have been instrumental in feeding America while also helping to flatten the curve during the initial phases of the pandemic. To recognize and thank our associates for their incredible work during this historic time, we offered special pay in March, April and May," said Rodney McMullen, Kroger's chairman and CEO.

The move comes as Kroger ends its "Hero Pay" for some 450,000 workers, a $2 per hour premium. "We are extremely disappointed  by Kroger’s decision to end Hero Pay and we know that our members are disappointed as well," said Marc Perrone, president of the United Food and Commercial Workers. "At the beginning of this crisis, Kroger first called these workers 'heroes' and now they have decided that they’ve stopped being heroes.

Food retailers have, of course, remained open during the general store closings and economic cratering brought upon by the COVID-19 outbreak. With many store hours expanded and consumer demand on the upswing during the last couple of months — and with some company leave policies loosened to protect grocery workers — the food retail industry has gone on a hiring spree. As well, with the spike in popularity of online and mobile grocery shopping, and the associated growth in delivery and curbside pickup services, food retailers are leaning on their workers more than ever, and have sought to reward them.

Kroger has been among the leaders in offering its workers financial sweeteners during the outbreak. The retailer, latching onto larger payment and disbursement trends in the wider retail world and gig economy, has also gone a step further in the interest of easing worker anxieties. In late April, the grocery chain became the latest U.S. employer to offer a benefit enabling employees to receive their paychecks as they earn them, in addition to raises and bonuses. ExpressPay, powered by DailyPay, gives employees the financial flexibility to pay their bills, as well as to buy necessary supplies as their earnings are readily available, not just on payday.

Cincinnati-based Kroger employs nearly half a million associates who serve 9 million-plus customers daily through a seamless digital shopping experience and 2,769 retail food stores under a variety of banner names. The company is No. 3 on The PG 100, Progressive Grocer’s 2020 list of the top food retailers in in North America.