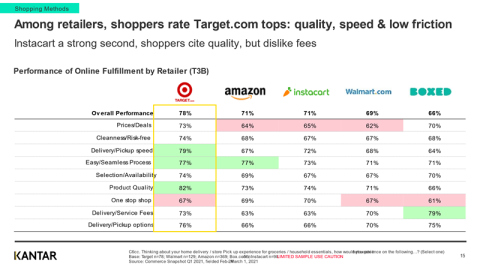 According to data from Kantar’s "Commerce Snapshot" report, Target ranked highest in online fulfillment, while Amazon and Instacart tied for second.

According to new data from Kantar’s "Commerce Snapshot" report, Target.com ranked highest in overall online performance among consumers, with 78% having a positive experience on the website. Target’s top ranking was due to its strong performance in quality (82%), delivery speed (79%) and low friction (77%).

Meanwhile, delivery service provider Instacart and e-commerce giant Amazon were tied for second, at 71% each. San Francisco-based Instacart scored high due to the quality of its product, ranking second among all retailers, at 74%.

Seattle-based Amazon scored high in Kantar’s research due to its speed, tied for first with Target at 77%. Walmart and New York-based online grocery retailer Boxed rounded out the top five, at 69% and 66%, respectively.

Amazon is looking to further improve its product deliveries via a new research effort. The Amazon Last Mile Team is collaborating with the Massachusetts Institute of Technology on the Amazon Last Mile Routing Research Challenge, in which academic teams train machine-learning models to predict the delivery routes chosen by experienced drivers, according to Larry Hardesty, the editor of the Amazon Science Blog. In addition to monetary prizes, top-performing teams may be interviewed by Amazon for research positions in the Last Mile organization.

Kantar's research indicated that today's online shoppers desire a seamless experience, with out-of-stocks (27%) and not trusting others to select products/produce for them (27%) being the biggest pain points for shoppers. Consumers also don't like the cost of shopping online, with 24% being frustrated by the cost of it.

Walmart has been recently making moves to boost its same-day delivery by removing the $35 order requirement for its Express delivery service. This follows news of the Bentonville, Arkansas-based retailer scrapping the same minimum-order rule from its Walmart+ subscription service.

Retailers will need to keep abreast of ways to satisfy their online shoppers post-pandemic. According to Instacart, which along with The Harris Poll, surveyed 2,038 U.S. adults, of those who bought groceries online during the pandemic, 77% indicated they are likely to continue doing so in the future.

Instacart  partners with nearly 600 national, regional and local retailers, including unique brand names, to offer delivery and pickup services from more than 45,000 stores across more than 5,500 cities in North America.