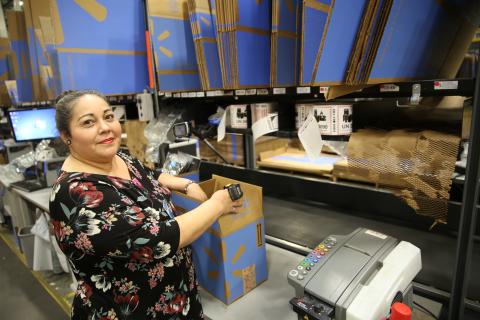 The move from Walmart is the latest development in the retailer's bid to attract more shoppers to its e-commerce offering.

Walmart is taking yet another step in its battle to compete with Amazon and other retailers on same-day delivery.

Walmart is removing the $35 order requirement for its Express delivery service just a few months after scrapping the same minimum order rule from its Walmart+ subscription service.

The move from Walmart is the latest development in the retailer's bid to attract more shoppers to its e-commerce offering. Walmart's growth in the e-commerce segment has been higher than Amazon in the last three fiscal quarters of the pandemic as the company has attracted scores of shoppers to its grocery pickup service during the pandemic.

Walmart's Express delivery allows customers to get items, food or non-food, delivered to their doorstep in two hours or less. Like Walmart’s pickup and delivery service, there is no markup on items — an item is priced the same as it is on the shelf. Express delivery costs $10 on top of the existing delivery charge. Walmart+ members simply pay the $10 Express fee.

“Many customers use Express delivery for when they’re in a pinch, whether it be a missing ingredient for a weeknight dinner or a pack of diapers,” said Tom Ward, SVP of customer product at Walmart. “Customers told us sometimes the items they needed in a hurry didn’t meet the minimum, so we’re removing it, making it even easier for customers to get what they need when they need it.”

Express delivery is currently offered in nearly 3,000 Walmart stores, reaching nearly 70% of the U.S. population. It is one of several no-contact pickup and delivery options at Walmart. Several of Walmart's other e-comm options continue to carry a $35 minimum, however: grocery pickup, regular delivery and Walmart+ delivery.

Walmart has also been pushing to create more local fulfillment centers in its stores.

In January, Ward wrote in a blog post, “Our customers love the speed and convenience of pickup and delivery, and we’re committed to finding faster ways to serve them, which is why we’re scaling the number of stores that will also serve as local fulfillment centers. We’re already planning dozens of locations, with many more to come.”

As Ward defines it, a local fulfillment center (LFC) “is a compact, modular warehouse built within, or added to, a store. In addition to fresh and frozen items, LFCs can store thousands of the items we know customers want most, from consumables to electronics. Instead of an associate walking the store to fulfill an order from our shelves, automated bots retrieve the items from within the fulfillment center. The items are then brought to a picking workstation, where the order can be assembled with speed.”

Walmart’s focus on LFCs come as grocery and other types of retailers race to deploy new fulfillment technology and networks — in large part a response to the spike of online shopping, a trend most recently fueled by the pandemic.

The Kroger Co., for instance, just announced that it is building a new customer fulfillment center (CFC) in Phoenix, Arizona. The food retailer is partnering with Ocado on the project, which was previously announced, though without location details. The CFC model — an automated warehouse facility with digital and robotic capabilities — will be used to serve customers across the region. Kroger says it is designing a flexible distribution network, combining disaggregated demand and the proximity of its stores and facilities that vary in design and size.

Bentonville, Arkansas-based Walmart operates more than 11,400 stores under 55 banners in 26 countries, and e-commerce websites, employing 2.2 million-plus associates worldwide. Walmart U.S. is No. 1 on The PG 100, Progressive Grocer’s list of the top food and consumables retailers in North America, while Walmart-owned Sam's Club ranks No. 9 on the list. Cincinnati-based Kroger is No. 3 on The PG 100 list.