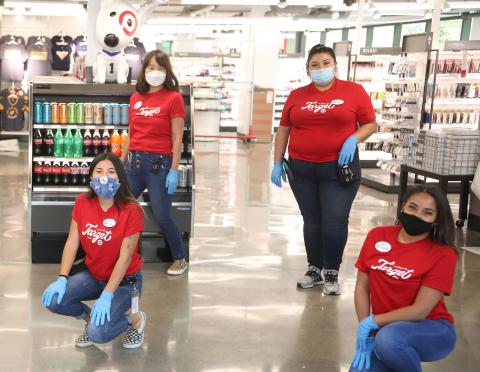 Target invested an additional $1 billion in its workforce in 2020, including five recognition bonuses for front-line team members.

It's clear that Target's "multi-channel shopper strategy" is working after the retailer reported a blockbuster holiday quarter of impressive sales and traffic growth.

Target says it will invest $4 billion annually over the next several years to open new stores and cut delivery times for online orders. During Q4, same-day services (Order Pick Up, Drive Up and Shipt) grew 212%, led by more than 500 percent growth in Drive Up. More than 95% of Target's fourth quarter sales were fulfilled by its stores. Target also said it will add two distribution centers and test micro-fulfillment centers to speed up order processing the rest of the year through Christmas.

Clearly Target's multi-channel shopper strategy of offering a diverse mix of physical and digital shopping options is attracting new customers and inspiring loyalty in and repeat purchases from existing customers who love the merchandise mix.

At a virtual investor day on Tuesday, Target CEO Brian Cornell made the case that the retailer’s recent results aren’t a pandemic-related fluke but proof that the company's long-term strategy is working.

“Far from being a fluke, this performance is further proof that we built a business model that is working as intended, one that puts Target in a category of its own,” Cornell said.

"Following years of investment to build a durable, scalable and sustainable business model, we saw record growth in 2020, as our guests turned to Target to safely provide for their families throughout the pandemic," said Brian Cornell, chairman and chief executive officer of Target. "With the strength of our unique, multi-category assortment and the flexibility we offer through our reliable and convenient fulfillment options, we gained nearly $9 billion in market share in 2020, and grew our revenue by $15 billion, which is more than the 11 prior years combined. As we look ahead to 2021 and beyond, we see continued opportunity to invest in our business and our team, building on the strong foundation we've established to drive market share gains and deliver profitable growth for years to come."

Fourth quarter operating income margin rate was 6.5% in 2020 compared with 5.1% in 2019. Fourth quarter gross margin rate was 26.8%, compared with 26.3 percent in 2019, reflecting the benefit of merchandising actions, most notably the unusually low markdown rates, partially offset by the impact of higher digital fulfillment and supply chain costs, along with the impact of category mix. Fourth quarter SG&A expense rate was 19.2% in 2020, in line with 19.3% in 2019, as investments in safety and team member pay and benefits were offset by leverage resulting from strong revenue growth.

The retailer opened 30 new stores in 2020, with a "record year of 29 new small-format stores." Target plans to open 30 to 40 new stores each year. Some of these stores will be near college campuses and in major cities such as New York, Los Angeles and Portland.

Full-year operating income was $6.5 billion in 2020, an increase of 40.4% from $4.7 billion last year. Full-year gross margin rate was 28.4%, compared with 28.9% in 2019. This rate decline reflects unfavorable category sales mix and higher supply chain and fulfillment costs from channel mix, partially offset by markdown favorability. Full-year SG&A expense rate was 19.9% in 2020, compared with 20.8% in 2019, reflecting significant leverage on fixed costs that offset investments in team member pay, benefits, and safety.

In the first quarter of 2020, the company withdrew its guidance, in light of the highly fluid and uncertain outlook for consumer shopping patterns and the impact of COVID-19.  In the face of continued uncertainty, the company is not providing sales and EPS guidance for Fiscal 2021 and beyond.

The company paid dividends of $341 million in the fourth quarter, compared with $334 million last year, reflecting a 3.0 percent increase in the dividend per share, partially offset by a decline in average share count.

The retailer promoted Christina Hennington to be chief growth officer, overseeing all merchandising for the company. Hennington will also have oversight of Target's product design and global sourcing organizations, as well as enterprise strategy, insights and innovation. As chief growth officer, she will work across Target's organization to identify and pursue revenue-generating strategies that deepen the company's relevancy with current and prospective guests, and reinforce its stronghold as a leading U.S. retailer.

Hennington, who joined Target in 2003, has been instrumental in the retailer's efforts to modernize its merchandising organization, leading the industry by blending its physical and digital buying functions. Additionally, she played a critical role in establishing Target as a reliable and trusted destination for essential needs during the pandemic.

The retailer said Jill Sando will now lead buying for all of Target's hardlines and softlines product categories as the company's EVP and chief merchandising officer. Sando, who joined Target in 1997, will report to Hennington and remain a member of Target's executive leadership team.

Rick Gomez was named EVP and chief food and beverage officer. Gomez, who has been with Target since 2013, most recently served as the company's chief marketing, digital and strategy officer. During that time, he led the organization in deepening its relationship with its guests, launched one of the country's fastest-growing loyalty programs and helped Target achieve industry-leading digital growth.

Gomez will leverage the deep expertise he has developed during his time at Target, combined with more than 20 years managing multibillion-dollar consumer packaged goods brands with MillerCoors, PepsiCo and the Quaker Oats Co. to further accelerate Target's food and beverage business. After 15 years with the company, Stephanie Lundquist, Target's former president of food and beverage, announced her plans to depart the organization earlier this year. She will remain in an advisory role through spring 2021.

Cara Sylvester was promoted to EVP and chief marketing and digital officer. Sylvester joined Target in 2007. Since that time, she has served in a variety of leadership roles across strategy and merchandising, most recently as SVP of home, during which she increased the product category's digital penetration to a leading position within the company and consistently drove strong sales and market share gains. In her new position, Sylvester will be responsible for deepening affinity for the Target brand across all platforms, furthering the company's popular loyalty program and in-house media company, and fueling continued digital growth for the retailer.

Katie Boylan was promoted to EVP and chief communications officer. Boylan, who joined Target in 2011, has played a critical role in advancing and protecting Target's reputation during her more than 10 years with the company. She has been leading the company's communications function since 2017. Her expanded responsibilities will now include Target's social responsibility and sustainability initiatives, as well as the company's philanthropic efforts, including the Target Foundation. Bringing Target's communications and corporate responsibility functions together will deepen the company's understanding of evolving stakeholder expectations, bring increased transparency to the work and help the organization drive even more meaningful environmental and social impact.

In November, Target said food and beverage sales, along with e-commerce, helped drive year-over-year sales growth of 21.3% in the third quarter.

Food and beverage sales growth was in the “high teens,” the retailer said, while digital comparable sales posted a 155% increased in Q3, among the highlights of Target’s financial results. Total revenue reached $22.66 billion driven by sales growth of 21.3% and an 18.1% increase in other revenue. Store comparable sales increased 9.9% year over year.

Also in November, Target celebrated the one-year anniversary of its loyalty program, Target Circle. Target also said that it would embark on a "strategic, long-term partnership to transform the beauty landscape" by installing Ulta Beauty shops in Target stores.

Minneapolis-based Target Corp. is No. 7 on The PG 100, Progressive Grocer’s 2020 list of the top food and consumables retailers in North America, with more than 1,900 locations.