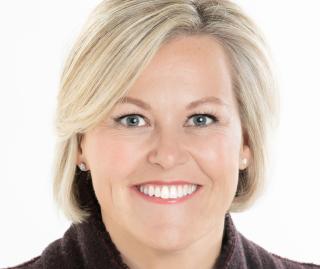 Christina Hennington, who joined Target in 2003, has been instrumental in the retailer's efforts to modernize its merchandising organization.

Target has created a new c-suite role to further position the company for growth.

The retailer has promoted Christina Hennington to be chief growth officer, overseeing all merchandising for the company. Hennington will also have oversight of Target's product design and global sourcing organizations, as well as enterprise strategy, insights and innovation. As chief growth officer, she will work across Target's organization to identify and pursue revenue-generating strategies that deepen the company's relevancy with current and prospective guests, and reinforce its stronghold as a leading U.S. retailer.

Hennington, who joined Target in 2003, has been instrumental in the retailer's efforts to modernize its merchandising organization, leading the industry by blending its physical and digital buying functions. Additionally, she played a critical role in establishing Target as a reliable and trusted destination for essential needs during the pandemic.

The retailer says Jill Sando will now lead buying for all of Target's hardlines and softlines product categories as the company's EVP and chief merchandising officer. Sando, who joined Target in 1997, will report to Hennington and remain a member of Target's executive leadership team.

"At the core of Target's success is the most talented team in retail," said Brian Cornell, chairman and CEO, Target. "The depth of expertise across Target's leadership team in particular has been a critical driver in Target's winning strategy and the excellence of our operations. The changes we're announcing create new opportunities for key leaders to bring their knowledge and experiences to different areas of the business. I'm confident these moves will drive Target's position as a best-in-class retailer today and well into the future."

Rick Gomez has been named EVP and chief food and beverage officer. Gomez, who has been with Target since 2013, most recently served as the company's chief marketing, digital and strategy officer. During that time, he led the organization in deepening its relationship with its guests, launched one of the country's fastest-growing loyalty programs and helped Target achieve industry-leading digital growth.

Gomez will leverage the deep expertise he has developed during his time at Target, combined with more than 20 years managing multibillion-dollar consumer packaged goods brands with MillerCoors, PepsiCo and the Quaker Oats Co. to further accelerate Target's food and beverage business. After 15 years with the company, Stephanie Lundquist, Target's former president of food and beverage, announced her plans to depart the organization earlier this year. She will remain in an advisory role through spring 2021.

Cara Sylvester has been promoted to EVP and chief marketing and digital officer. Sylvester joined Target in 2007. Since that time, she has served in a variety of leadership roles across strategy and merchandising, most recently as SVP of home, during which she increased the product category's digital penetration to a leading position within the company and consistently drove strong sales and market share gains. In her new position, Sylvester will be responsible for deepening affinity for the Target brand across all platforms, furthering the company's popular loyalty program and in-house media company, and fueling continued digital growth for the retailer.

Katie Boylan has been promoted to EVP and chief communications officer. Boylan, who joined Target in 2011, has played a critical role in advancing and protecting Target's reputation during her more than 10 years with the company. She has been leading the company's communications function since 2017. Her expanded responsibilities will now include Target's social responsibility and sustainability initiatives, as well as the company's philanthropic efforts, including the Target Foundation. Bringing Target's communications and corporate responsibility functions together will deepen the company's understanding of evolving stakeholder expectations, bring increased transparency to the work and help the organization drive even more meaningful environmental and social impact.

Target is scheduled to report fourth quarter and full-year earnings on March 2 at 9 a.m. ET.

In November, Target said food and beverage sales, along with e-commerce, helped drive year-over-year sales growth of 21.3% in the third quarter.

Food and beverage sales growth was in the “high teens,” the retailer said, while digital comparable sales posted a 155% increased in Q3, among the highlights of Target’s financial results. Total revenue reached $22.66 billion driven by sales growth of 21.3% and an 18.1% increase in other revenue. Store comparable sales increased 9.9% year over year.

During the the quarter, more than 95% of the retailer’s sales were fulfilled by stores, with basket size increasing by 15.6%, and traffic by 4.5%. The retailer also reported gains on services related to e-commerce, with Shipt deliveries growing by nearly 280%, and same-day order pickup growing by more than 50%. Same-day drive-up delivery increased by more than 500%.

Also in November, Target celebrated the one-year anniversary of its loyalty program, Target Circle. Target also said that it would embark on a "strategic, long-term partnership to transform the beauty landscape" by installing Ulta Beauty shops in Target stores.

Minneapolis-based Target Corp. is No. 7 on The PG 100, Progressive Grocer’s 2020 list of the top food and consumables retailers in North America, with more than 1,900 locations.