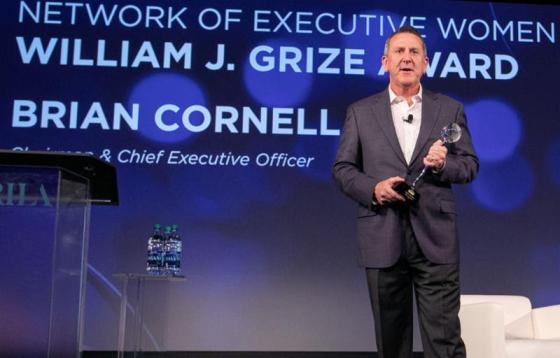 Receiving the William J. Grize Award Jan. 21 during the Retail Industry Leaders Association's Retail CEO Forum in Amelia Island, Fla., Target was noted for committing to gender equality from the c-suite down. In 2016, Target signed the White House Equal Pay Pledge, backing up that action with a comprehensive annual pay audit and leadership training designed to reduce bias in decision-making.

"Target's leadership team understands that creating a gender-diverse and inclusive workplace is a business imperative," said NEW President and CEO Sarah Alter, who presented the award to Target Chairman and CEO Brian Cornell. "Their efforts to level the playing field and realize the benefits of women's leadership have served as models for leaders in retail and beyond."

Added Alter: "But we know real change requires commitment and follow-through at every level. Target's gender diversity efforts are strong across functions, as women are represented, heard, recognized and developed as leaders at headquarters and in the field."

Know any outstanding women across any segment of the grocery industry – retailer/wholesaler and supplier/vendor communities – who have demonstrated above-and-beyond achievements between April 2018 and March 1, 2019?

Nearly half of Target's store managers are female, each overseeing up to 500 employees and responsible for maximizing profitability, guest experience and sales. Women make up 36 percent of Target's board and 45 percent of its executives.

The William J. Grize Award is named for the late president and CEO of Stop & Shop, an early champion of gender diversity. Since 2011, the award has honored industry leaders and companies who have demonstrated "an enduring commitment to the advancement of women and to creating a diverse and inclusive workplace."

Prior grocery executives and grocers to receive the award include Jeff Noddle, the retired CEO of Supervalu; Judy Spires, of Kings Super Markets; and Mike Duke, of Walmart Inc.

Target's commitment to diversity extends the retailer's belief that employees are the strongest area in which to make their investments. At Retail's Big Show, hosted by the National Retail Federation Jan. 12-15 at the Jacob K. Javits Center, in New York, Cornell noted that it's the people behind the brand who create the brand experience and serve as your brand ambassadors. Last year was Target's best year in more than a decade, and while store remodels, new brands, fresh technology and more all played a role, the biggest reason for this success was the retailer's $1 billion investment in its own associates.

Minneapolis-based Target Corp. operates 1,800 stores and its ecommerce site, Target.com. The company is No. 13 on Progressive Grocer’s Super 50 list of the top grocers in the United States.