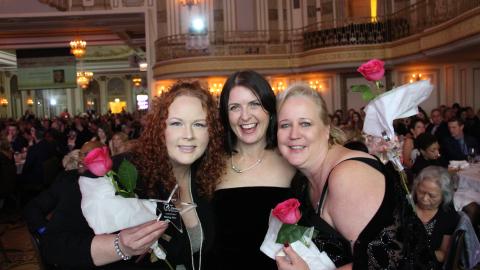 The event, hosted by PG Director of Content Joan Driggs and Senior Editor Kat Martin and held at the Palmer House Hilton, recognized women who offer invaluable industry contributions from all walks in the retail food industry during a daytime educational program and an evening gala.

“Women and men are entering the workforce in about equal numbers, according to LeanIn and McKinsey data, but that’s where the equal representation stops. Women already are falling behind from the first step into management,” Martin noted in her address to the honorees, who were selected from nearly 700 nominations, and industry guests. “Take a look at your own company. Does your company reflect its shopping population – the people in the stores buying the products, the community we all serve in some capacity?”

During the evening gala, Kathy Russello, EVP, people systems and services at Retail Businesses Services (RBS), the services company of Ahold Delhaize USA, was named the 2018 Trailblazer, an award that honors a a single executive whose leadership, vision and influence have helped break new ground for women in the retail food industry. The award was presented by Sarah Alter, president and CEO of the Network of Executive Women, and Shirin Odar, South Region VP for PepsiCo.

“Kathy has been a role model for women in retail grocery and has helped countless women attain their career goals,” Alter noted. “She has tackled policies that have held women back. She has championed leadership development programs that have helped women move ahead. And she has supported a workplace culture where women are seen, heard and respected for their talent and the business results they deliver.” 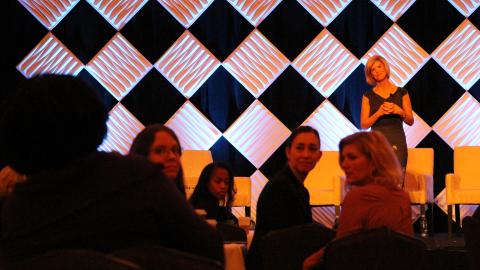 To kick of the Top Women in Grocery festivities, the Leadership Development Program addressed the realities facing women in the workforce. Keynote speaker Julie Jones, GM of grocery and home improvement for Procter & Gamble, discussed the "5 Myths Women Face in the Workforce," most based in the erroneous idea that the workforce is fine, but it’s the women who need to change. She noted that there's a whole industry built around the concept that we need to “fix” the women.

“Not all women want to be CEO, but neither do all men,” Jones noted. “Men are called leaders, and women are called bossy. We have to broaden our definition of a leader – stop being so binary.”

NEW’s Alter and Julie Janckila, director of corporate partnerships, addressed the organization’s research regarding women in leadership positions. Companies need to focus on conscious inclusion to get away from unconscious bias, Alter observed. She also suggested three things all women need to do in their respective workplaces: advocate for themselves and others, negotiate, and invite. 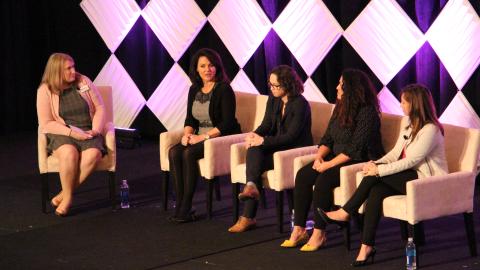 PG’s Martin also led a panel of Top Women winners to discuss their own experiences and to offer advice in answer to questions from the audience. The panelists were Susan Morris, EVP and COO of Albertsons; Kelly Sosa, SVP and general manager of Davidson’s Specialty Foods, a division of C&S Wholesale; Rachel Shemirani, VP of marketing for Barons Market; and Sara Herring, director club channel for Coca-Cola Bottling.

The day’s educational program was rounded out by motivational speaker Lee Ann Piano, who urged the audience to "Go For It!" Piano suggested that everyone take a closer look at their own leadership styles, because "behavior permitted is behavior repeated," while "performance is measured and potential is discovered."

The day’s festivities concluded with the Hershey Dessert Party, where the winners and industry guests hit the dance floor while enjoying some delicious chocolate-based desserts.