The original Target logo was designed in 1962 and made way for today's streamlined bullseye logo.

Just over six decades ago, shoppers eagerly awaited the grand opening of Target Corp.’s first store in Roseville, Minn. May 1, 1962, marked that location’s first day in business, and the retailer is taking a look back on its rise to retail supremacy.

The idea for Target came about as The Dayton Company was looking to develop a new kind of mass-market discount retailer. On May 9, 1961, it was reported that the company planned to form a discount store chain with Douglas J. Dayton at the helm.

The new company’s name and logo were conceived by former Dayton's Director of Publicity Stewart K. Widdess, whose staff came up with the name Target and envisioned a classic bullseye logo. "As a marksman's goal is to hit the center bulls-eye, the new store would do much the same in terms of retail goods, services, commitment to the community, price, value and overall experience," said Widdess.

That first location in Roseville was 68,800 square feet and billed itself as a discount store that combined quality and service with more than 75 departments ranging from groceries to fashion. Three more stores opened around Minnesota that year, in St. Louis Park, Crystal and Duluth. 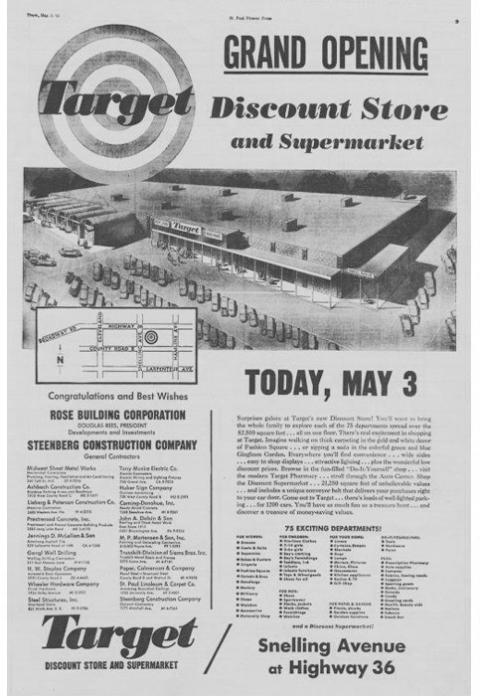 Even the retailer’s fancy “Tarzhay” nickname was coined the same year it opened its first store. “Duluth was the first place I heard it: Customers started calling it ‘Tarzhay.’ That was 1962,” Dayton said. “We surprised ‘em, because they had such low expectations for a discount store.”

National expansion plans were underway in 1966 as Target opened two new stores in Denver and further growth was made possible when The Dayton Corporation went public in 1967. Those early stores made way for today’s 1,900-plus stores that are right-sized for each neighborhood Target is in.

The company is touting its commitment to its team members and the communities it serves as it celebrates this milestone, as well as today’s safe and convenient fulfillment options and its partnerships with major companies including Disney, Apple and Ulta Beauty.

The company continues to experience topline growth on top of unprecedented increases over the last two years. Its multi-category assortment served a wide range of customers’ needs during the first quarter, with the strongest performance in food and beverage, household essentials and beauty.