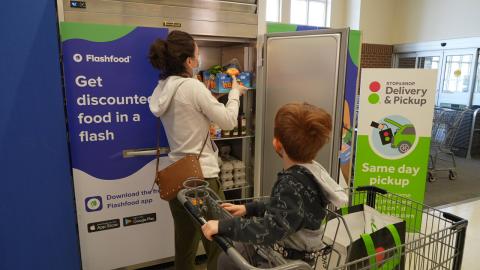 Stop & Shop is rolling out the Flashfood program to more stores in the Northeast.

After a successful pilot, Stop & Shop is launching the Flashfood waste reduction program to additional stores in Rhode Island. The initiative, a digital marketplace that connects shoppers with food nearing its best-by date, is one way that the Northeast retailer is helping to eliminate food waste at its point in the farm-to-table chain.

Already in place at four Stop & Shop locations in Worcester, Mass., Flashflood will be rolled out at five sites in Rhode Island, including two stores in Providence, one store in North Providence, one store in East Providence and one store in Pawtucket. Through the use of an app and in-store pickup, the program helps shoppers find and save on both perishable and non-perishable foods, such as meat, dairy, produce, baked foods and packaged products close to the end of their shelf life.

According to Stop & Shop, the effort has made a substantial difference during the testing phase in Massachusetts. In eight months, the grocer’s Flashfood program there slashed food waste by nearly 35,000 pounds.

“Each year we aim to give back to the communities we serve in an effort to fight hunger, food waste, and help our shoppers save money,” said Gordon Reid, president of Stop & Shop. “Alongside our community donation programs, Flashfood is another program we’re excited about to give our customers a new opportunity to save on fresh foods. We’ve already seen how the program helps families significantly save money on their grocery bills, while also helping our environment.”

Echoed Josh Domingues, Flashfood’s founder and CEO:“Our retail partners are seeing firsthand how through innovation, we really can make an impact. As of this month, the combination of all our retail partnerships have resulted in diverting 30 million pounds of food from ending up in landfills, and this is just the beginning.”