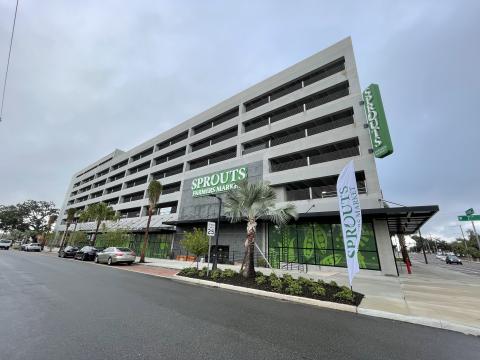 Sprouts Farmers Market is starting off fiscal 2022 by shaking up its C-suite and generating some momentum from fourth quarter sales.

The retailer named Nicholas Konat as its new president and COO on the same day it reported comp transactions for the fourth quarter were slightly positive.

Konat most recently served as chief merchandising officer at Petco Health and Wellness Company Inc. He will oversee the grocer’s operations, marketing, merchandising and innovation functions and report to Jack Sinclair, CEO.

“I am absolutely thrilled to welcome Nick to the Sprouts executive leadership team,” Sinclair said. “Nick’s deep-rooted merchandising and product innovation experience with preeminent retail brands will help to propel our company forward as we continue to execute on our strategic plan.”

Prior to joining Petco, Konat served as director of food merchandise planning at Target Corp., capping a more than nine-year career at Target where he held a range of merchandising, planning and leadership roles across the food and fashion categories.

The company also disclosed in an SEC filing that Chief Marketing Officer Gil Phipps has transitioned to the role of senior marketing advisor. In a letter filed with the SEC, SVP of Human Resources Timmi Zalatoris wrote that Phipps "will serve as senior marketing advisor through May 31, 2022, at which time his continued employment with the company will be evaluated by the chief executive officer."

The company did not say whether it intends to begin a search for a new chief marketing officer.

Phipps joined Sprouts in 2020 after serving as a senior merchandising exec with The Kroger Co. for years.

"Comp transactions for the quarter were slightly positive," said CFO Chip Molloy in an earnings call. "It was the first quarter with positive comp transactions since 2018. Average retail prices were up primarily due to inflationary cost pressures passed on to the consumer, while our units per basket were down as we continue to cycle the larger baskets that occurred during the first 12 months of the pandemic. Encouraging is the fact that our units per basket for the quarter were still higher than they were during the same period in 2019 even with higher prices."

Molloy said e-commerce sales were 10.4% of total sales, "settling to what appears to be a relatively stable run rate. Fourth quarter gross margin dollars totaled $533 million and gross margin rate was 35.7%. The margin decline of approximately 100 basis points was driven predominantly by a slight lag in price increases relative to the pace of cost increases. That gap has been narrowing as we've moved into the first quarter of this year."

For 2022, Sinclair said the company expects total sales growth between 4% and 6% with comparable store sales growth of 0% to 2%.

During the year, Sprouts opened 12 new stores and relocated one. In 2021, Sprouts debuted a smaller, more profitable new format store.

"Our SKU count is very similar to older vintages with a slight change in departmental mix, resulting in similar opening sales," Sinclair said. "In total, we had four of those stores in 2021, including one relocation and one remodel. Produce remains the cornerstone of the new format stores highlighted by prominent position in store, new varietals and of course, a focus on best quality at everyday great prices. We expanded the frozen department, put a greater emphasis on plant-based items, both of which are showing stronger sales in the new vintage. And despite the deli being smaller in scale and lowering cost to build, it continues to show sales strength with the addition of more grab and grow options and prepared foods, even after taking out more labor-intensive items like salad bars. Most all the new stores this year will be in the new format, except for the seven stores we pushed from 2021 due to supply chain challenges in getting equipment."

The grocer now expects to open 15 to 20 new stores, less than its previous communication of 25 to 30 and its strategic goal of 10% growth per year, due to the "ongoing permitting and supply chain challenges associated with sourcing materials and equipment," Sinclair said.

Phoenix-based Sprouts Farmers Market, which employs more than 35,000 team members at 374 stores in 23 states, is No. 48 on The PG 100, Progressive Grocer's 2021 list of the top food and consumables retailers in North America.