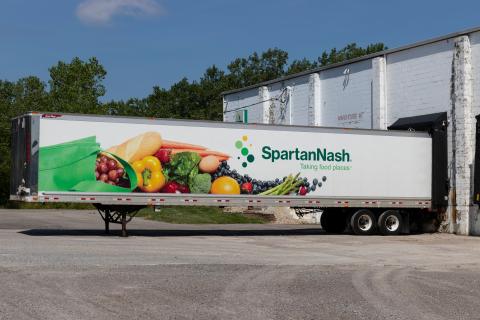 While SpartanNash's food distribution and retail segments have fared well during the pandemic because of higher consumer demand, logistical issues have adversely affected its military distribution segment.

For its 12-week second quarter ended July 11, SpartanNash Co. has reported net sales growth of 9.4% to $2.18 billion, from $2 billion in the year-ago period, racking up 17 straight quarters of growth. The company also logged Q2 2020 retail comparable-store sales of 17.1% — the fourth consecutive quarter of increases. SpartanNash unsurprisingly attributed these gains to the ongoing increased consumer demand amid the COVID-19 pandemic, which was first noted in its Q1 financial results.

The company also saw earnings per share (EPS) rise to 80 cents from a loss of 19 cents per share last year, and reported adjusted EPS of 73 cents, a 115% increase from the year-ago period. SpartanNash’s adjusted EBITDA increased 33.5% to $59.2 million, from $44.3 million last year.

“The strength and resiliency of our team was demonstrated by their ability to continue to execute in a dynamic operating environment as they supported the surge in consumer demand related to the COVID-19 pandemic, which enabled us to exceed our financial expectations for the second quarter,” noted Dennis Eidson, SpartanNash’s interim president and CEO, whose term at the helm was extended on Aug. 4 for up to another 90 days while the board of directors continues to seek a successor. “We are pleased with the collaboration across our organization and our ability to respond to the challenges associated with this incremental demand, while remaining focused on our priority of ensuring the well-being and safety of our associates and customers. Based on our strong year-to-date results and expectations for the remainder of the fiscal year, we are raising our full-year guidance.”

Gross profit for SpartanNash’s Q2 2020 was $338.4 million, or 15.5% of net sales, versus $289 million, or 14.5% of net sales, last year, mainly because of an increase in retail-segment sales, which traditionally generate higher margin rates in proportion to total company sales, in addition to lower levels of inventory shrink in the retail segment.

The company’s reported operating expenses for Q2 were $304.4 million, or 13.9% of net sales, compared with $281.6 million, or 14.1% of net sales, in the year-ago period. The decrease in expenses as a rate of sales, attributed to a decrease in restructuring charges, lower health insurance costs, and increased leverage of expenses from higher sales volume, particularly retail store labor and certain fixed costs, was partly offset by significant increases in incentive compensation because of improved overall company performance, as well as increases in supply-chain expenses as a rate to sales. The company also incurred direct costs associated with the pandemic, among them extra compensation for front-line associates and higher cleaning and sanitation frequency within all operating locations.

Additionally, cash generated from Q2 operating activities of $69 million led to a more than $40 million paydown of long-term debt.

In the company’s food distribution segment, net sales grew $154.5 million, or 16.5%, to $1.09 billion, from $0.94 billion last year. Reported operating earnings for food distribution came to $14.4 million versus $0.3 million in year-ago period. The increase in reported operating earnings was due to asset impairment charges associated with changes to the fresh production business in the prior-year quarter, a current-year quarter increase in sales volume related the impacts of COVID-19 and cycling prior-year operational losses in the fresh production business, largely offset by higher incentive compensation and a higher rate of supply-chain expenses.

Net sales for retail rose $61.3 million, or 10.8%, to $631.3 million from $570 million last year, while comps of 17.1% were partly offset by the impact of lower fuel prices and gallons sold, in addition to store closures. During the quarter, the SpartanNash saw more than 300% growth in e-commerce and growth of more than 24% in private label sales. Reported operating earnings for retail were $24.5 million compared to $8.7 million last year, which the company attributed to the increase in sales volume; improvements in margin rates, including inventory shrink; and favorable variances in both labor rates and health insurance costs, although these last two were somewhat mitigated by higher incentive compensation and incremental compensation for front-line employees.

By contrast, net sales in the military distribution segment declined $27.6 million, or 5.6%, to $463 million from $490.6 million last year. According to SpartanNash, higher export sales were more than offset by the impact of domestic base access and commissary shopping restrictions related to COVID-19, which led to an overall drop of more than 10% for the Defense Commissary Agency as a whole. The reported operating loss for military distribution was $4.9 million, versus $1.6 million in the year-ago period, driven by increases in the rate of supply-chain expenses, and partly offsetby improved margin rates.