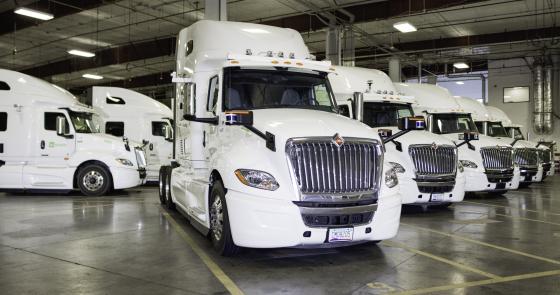 The horizon for the future of self-driving vechicles has gotten a little closer. This week, a San Diego tech company revealed that one of its fully autonomous semi trucks completed an 80-mile run in Arizona.

According to TuSimple, the test was the first successful trip by a self-driving class 8 vehicle on open roads with no human intervention. The run occurred in the evening, starting from a railyard in Tucson and finishing at a distribution center in Phoenix. The Arizona Department of Transportation and law enforcement officials supervised the trip.

To help ensure safety, the fleet included a vehicle that drove 5 miles ahead of the semi to check for unexpected obstacles, and a trailing vehicle in place to intervene if necessary. The semi was able to navigate lane changes, traffic signal stops and merging via on-ramps.

“This test reinforces what we believe is our unique position at the forefront of autonomous trucking, delivering advanced driving technology at commercial scale,” said Cheng Lu, TuSimple’s CEO.

Founded in 2015, TuSimple has 70 autonomous trucks around the world and has completed 2 million miles of road testing. The company aims to help those who transport goods address labor issues, claiming that its virtual drivers can be deployed for significantly less than traditional drivers and that its technology saves about 10% in fuel-related costs.  According to the company, its technology enables trucks to see 1,000 meters away.

Last May, Giumarra Cos., an international network of fresh produce growers, distributors and marketers, and The Associated Wholesale Grocers Inc. (AWG), the nation’s largest cooperative food wholesaler, took part in a groundbreaking pilot with TuSimple, in which the autonomous-vehicle provider picked up a load of fresh watermelons from Giumarra's facility in Nogales, Ariz., and transported it across four states to an AWG distribution center in Oklahoma City, Okla., where the fruit was inspected and distributed to Doc’s Country Mart and Homeland grocery stores in the state.