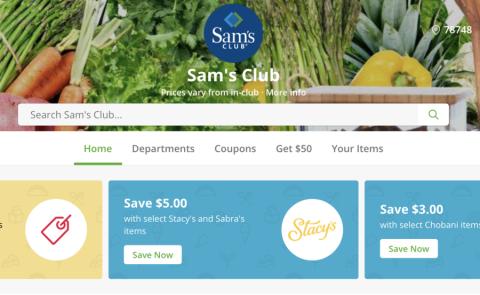 Expanding on its initiative that began in February, Sam's Club is growing its same-day-delivery footprint to half of its locations by the end of the month.

Made possible through a partnership with grocery technology company Instacart, the service is rolling out to an additional 100 locations, which will serve a total of 1,000 more ZIP codes and 90 new markets, including New Jersey, Indianapolis and Houston. Currently, 238 locations offer same-day delivery.

Shoppers can now order their groceries online and add any gifts or small appliances to their orders, just in time for the holiday season. No membership is required to shop Sam's online via San Francisco-based Instacart, which allows access to the club chain's savings and exclusive items. Sam's Club members can, however, take advantage of lower, member-only pricing.

"Our members love this service, so we decided to give the gift of fast, easy home delivery to more members just in time for the holidays," said Sachin Padwal, Sam’s Club VP of product management. "To help the holidays run smooth, we’re offering a wide product assortment available on Instacart so shoppers can now get household goods delivered. We’re excited that last minute gifts, small appliances, extra pillows and towels – just to name a few things – are just a few clicks and minutes away."

Sam’s Club first added same-day delivery of groceries and everyday essentials through Instacart back in January, piloting the service at 61 locations in three markets: Austin and Dallas-Fort Worth, Texas, and St. Louis. It recently expanded the service into San Diego and Los Angeles.

At a time when consumers are increasingly time-strapped and looking for more ways to shop their favorite retailers – and Amazon is increasingly threatening both brick-and-mortar and online grocers – Sam's Club is offering a number of new options. In addition to the expansion of its grocery ecommerce program, the retailer has reportedly been readying a new-concept store to open in Dallas’ Lower Greenville neighborhood that's set to open this fall. The 32,000-square-foot building that will house it is smaller than a typical Sam's Club and will carry only 1,000 to 2,000 items instead of the average 6,000 offered in a typical Sam's store. Assortment will focus on convenience items, fresh food and grab-and-go meals, the newspaper noted, adding that these could include products sold under the private Member’s Mark brand providing upscale fare.