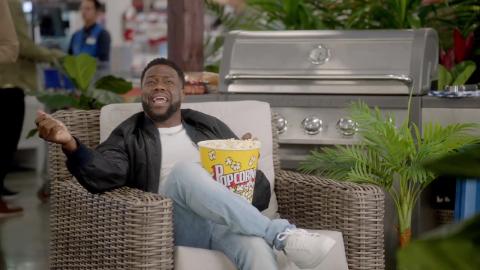 Sam’s Club will debut its first Big Game ad, highlighting its "VIP-worthy" services and merchandise members, with the help of comedian and actor Kevin Hart and his Laugh Out Loud (LOL) Network.

Since Sam’s Club is strategically focused on its digitally enabled shopping experiences, the warehouse club chain is using its gametime airtime to promote Scan & Go, its in-app shopping feature that lets members scan products and skip the checkout line when shopping in club.

The ad showcases Hart shopping under the assumption that he’s receiving a VIP experience because of his celebrity status. Unbeknownst to him, he’s using a service available for members with the Sam’s Club app. Sam's Club's first 30-second Big Game commercial will air at the two-minute warning in the fourth quarter.

"The timing was right for us," said Tony Rogers, Sam's Club's chief member officer. "Sam’s Club has had extraordinary momentum through our last reported quarter; in Q3, we recorded our seventh consecutive [instance] of double-digit comps and reported that membership is at an all-time high. It was time for us to highlight our brand on a bigger stage, and the biggest football game of the year gives us the perfect opportunity to reach an incredibly diverse audience of viewers."

Sam’s Club’s third quarter was indeed impressive: The Walmart-owned company reported that total sales increased 19.7% to $18.9 billion, while operating income increased 10.2% to $475 million in the quarter ended Oct. 31. Membership and other income increased 37.9% to $1.3 billion.

"We’re having a great time with the VIP campaign, and with our partnership with Kevin," added Rogers. "Sam’s Club is a fun place to shop, and we wanted that to translate in the work that we’re doing with Kevin and in the creative ways we’ll engage with viewers during the game."

Sam’s Club will carry its VIP theme into game day by giving fans a chance to score like a VIP. Full details will be shared when the full ad is revealed in a few weeks.

The Big Game ad was created by Sam’s Club’s creative agency, VMLY&R, with creative ideation from Hart and LOL Studios.

Sam’s Club, a division of Bentonville, Ark.-based Walmart Inc., operates nearly 600 clubs in the United States and Puerto Rico. Walmart operates about 10,500 stores under 48 banners in 24 countries, and e-commerce websites, employing 2.2 million-plus associates worldwide. Walmart U.S. is No. 1 on The PG 100, Progressive Grocer’s 2021 list of the top food and consumables retailers in North America, while Sam’s Club ranks ninth.