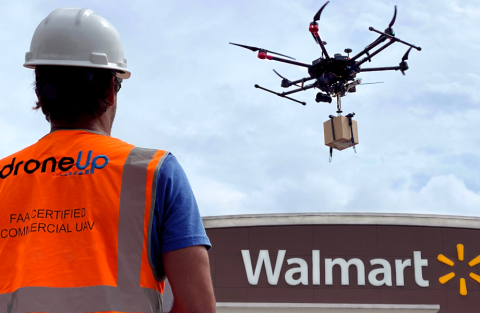 Deliveries from drone airport hubs in Arkansas are taking off for Walmart.

Some Walmart shoppers in Northwest Arkansas can get items delivered by drone in as fast as 30 minutes. This week, the retailer and drone technology partner DroneUp, LLC announced the launch of multi-site commercial drone delivery operations from drone airport “hubs” in that region, which will run 12 hours a day, seven days a week to fulfill orders from eligible consumers.

The first hub in Farmington, Ark., is up now, and two additional sites in the state, in Rogers and Bentonville, will open in the next few months. While providing convenience to customers, the last-mile capability also helps Walmart improve its operational efficiencies, according to company officials.

“When we invested in DroneUp earlier this year, we envisioned a drone delivery operation that could be quickly executed and replicated across multiple stores,” said Tom Ward, SVP of last mile at Walmart U.S., in a statement. “Opening our first hub within months of our initial concept showcases DroneUp’s ability to safely execute drone delivery operations with speed.”

Added Tom Walker, CEO of DroneUp: “Walmart and DroneUp provide an unrivaled ability to pick, pack and deliver via drones directly from the store to consumers offering efficiencies no other retailer can match. We are proud of our team’s ability to deliver the technology helping Walmart launch a new era of commercial drone operations.”

Earlier this year, Walmart announced its partnership with DroneUp as a way to provide scalable last-mile delivery solutions to its consumers. The company’s infrastructure in the United States lends itself well to drone coverage, with 4,700 stores filled with more than 100,000 of the most-frequently purchased items. Virginia Beach, Va.-based DroneUp, for its part, has a database of more than 10,000 Federal Aviation Administration (FAA) certified pilots and is an authorized government drone services provider for 11 U.S. states serving public sector organizations.